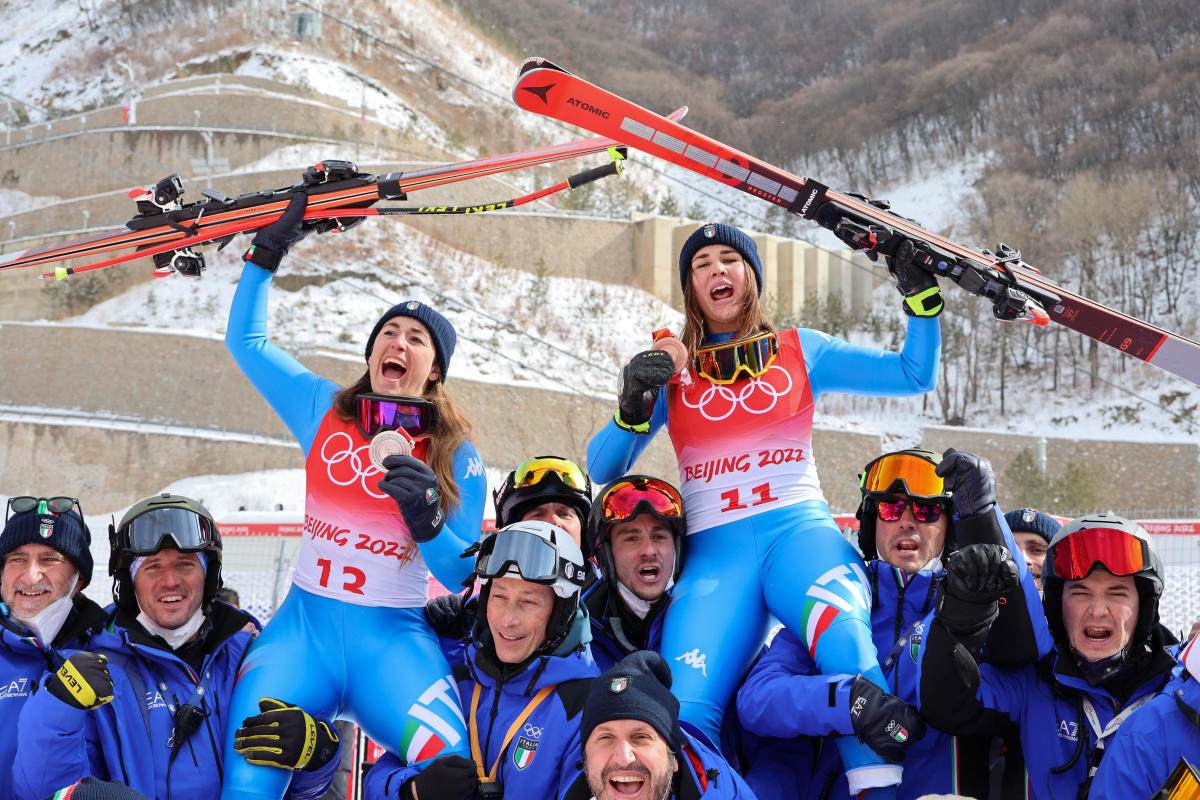 YANQING, China — Sofia Goggia bent over the leg that wouldn’t bend, and here, across the finish line that seemed impassable, she exploded.

She saw a green light, proof of an Olympic lead, and her brain raced – for three hellish weeks, until the January 23 accident that tore her left knee and fractured her fibula, and apparently shattered his dreams.

On Tuesday, 23 days later, she crossed a downhill finish line in first place and unleashed a primal scream.

It triggered joy, pain and disbelief. Last month in Cortina, Italy, on his favorite downhill run, his skis split. At 58 miles per hour, she had leapt into the air and flipped head over heels on a chilling sight. She partially tore her anterior cruciate ligament and suffered a minor fibula fracture, and the Beijing Games, to any sane mortal, seemed over.

That she skied to a silver medal, Shiffrin said, was “incredible.”

But for Goggia’s Italian teammates, it was no surprise.

And at some point, as she prepared to run on her left leg, did she get scared?

“No,” she said, pressing her lips together and shaking her head nonchalantly. “No. No, I wasn’t afraid.”

“Fear doesn’t exist,” she once said. “It’s just a mental projection of a situation that could end up going a certain way. On the one hand, it could be a limitation: it becomes a self-fulfilling prophecy. But if you look at it as an opportunity , it becomes something that makes you stronger.

A career full of accidents

The unbreakable woman of alpine skiing grew up in northern Italy, and at 9 years old, on a basic questionnaire, she scribbled down her dream: “Winning the Olympic downhill”. At 25, she achieved it in PyeongChang, and four years later, she was heading for the double. She entered 2022 as the most dominant force in the sport. She had won seven consecutive World Cup downhills, some with stunning margins.

In mid-January, I scheduled an interview with Goggia to talk about this trip. About dominance, yes, and the 2022 Games, but more so about everything she’s overcome along the way. Because the list, even by ski racing standards, is long.

As a teenager, she tore several knee ligaments. In 2012, she stretched a little more. She fractured her tibial plateau during a European Cup race. In 2013, two months before the Olympics in Sochi, she again tore her left knee – cruciate ligament, meniscus. She went to the Games as a TV commentator. She arrived at the airport in a wheelchair. His body and his heart were broken.

She returned to competition only to suffer another injury. She underwent surgery. She returned the following season, but further knee problems forced her to cut it short. She was asked, and is still being asked, why she persists despite the pain, and she understands the question.

But for her, “there is such a feeling” on a ski slope. “So much adrenaline, you feel so alive, this moment is worth it.”

She remained relatively healthy ahead of the 2018 Olympics and won gold. Then bad luck started to strike again. She broke her ankle in October. A little over a year later, she suffered an open fracture of her left arm. And a year later, a complex fracture of the lateral tibial plateau in a freak accident, while calmly descending a mountain after the postponement of a World Cup race.

But she still won the single-season downhill title. She returned to the snow in July and to the podiums in the fall. She was, in mid-January, a favorite as heavy as alpine skiing allows, and I found her backstory to be remarkable. The interview was scheduled for January 17.

On January 15, she left the World Cup downhill in Austria and crashed into a red net. The following weekend in Italy, she partially tore her ACL and cracked her fibula, and the interview, of course, never happened. She also wasn’t sure her defense of the Olympic gold medal would be.

“Leaving him,” Goggia said, “after [the crash in] Cortina, it would have been so easy.

But the Olympics, she had long thought, “are everything.” So after three days, she gave up the crutches. “With a day on crutches, you lose a week of training,” she said. The wound needed time, but “time”, she would later write, “is what I don’t have”.

She was racing against him. She tackled pool workouts and gym rehab much sooner than most doctors would have recommended. She cried along the way pushing away fear and dispelling doubts.

She arrived in China not knowing what she would be capable of. She walked with a limp. She struggled in super-G practice and pulled out of last Friday’s race. When she finished her first downhill training run, she raised her poles in celebration. Breathing heavily, she hugged her globes to her chest, smiled and looked around. Emotions overwhelmed her. “It’s already a success that I’m here,” she said.

But she hadn’t endured unimaginable pain just to show off. She wanted to compete. On Monday, she pushed a little harder in training. She could barely squat or bend her knee. Her fitness, she said, was 5.5 out of 10.

But on Tuesday, she skipped painkillers, and climbed up to the starting gate, and erased all but one thought from her mind.

She couldn’t “charge” like she wanted and couldn’t move like before. She grimaced on a big turn, and again later, when she got up from a chair herself.

But she picked up speed and climbed to first place. The Swiss Corinne Suter finally beat her and, understandably, she felt disappointed. She knew she could have gone faster, much faster, even with only 80% of her strength. She also felt “a bit of wind against me”.

But she had just won an Olympic medal on a decimated knee, a medal that “maybe 2% of the people here” thought she could win. She raised her arms to the sky. Her teammates and coaches lifted her into the air.

“If in the last few days someone had said to me, ‘You’re going to get a silver medal,’ I would have cried,” she said. “I am very happy.”