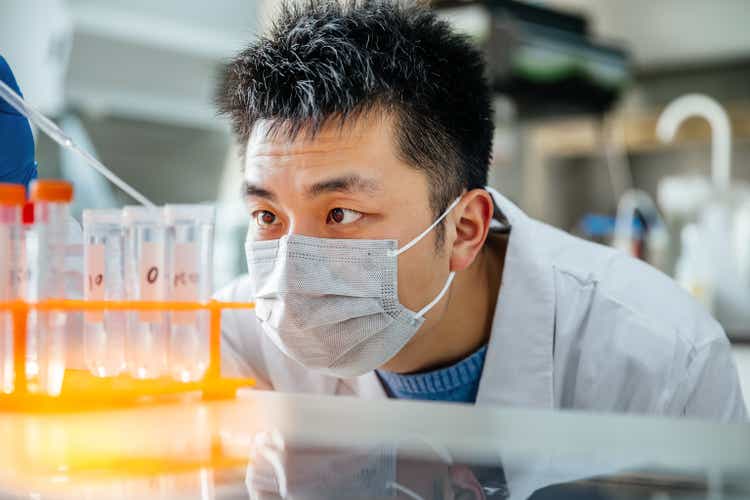 Jiangsu Hengrui Pharma (SHA: 600275) has launched a new global company, Luzsana Biotechnology, dedicated to making the most advanced drugs available and affordable in global markets (see narrative). For 25 years, Hengrui develops new drugs, with a portfolio of 250 clinical studies for unmet needs in oncology, cardiovascular, metabolic/diabetes, pain management, immunology and liver/kidney diseases. Initially, the company will co-develop 11 of Hengrui’s candidates (eight of them for oncology) that range from preclinical to Phase III. All nominees have first- or best-in-class potential, the company said. Luzsana is headquartered in Princeton, NJ, with facilities in Basel and Tokyo.

Sichuan Kelun Pharmaceutical has licensed worldwide (excluding China) rights to a lead molecule candidate to Merck in a deal worth nearly $1.4 billion (see narrative). Kelun will receive $47 million in upfront payments and up to $1.36 billion in milestone payments. Although the candidate has not been identified, it is expected to be SKB264, a third-generation TROP2-targeting antibody-drug conjugate in phase II trials in the United States and China. The candidate is being developed by KLUS Pharma, Kelun’s New Jersey-based drug development subsidiary. Merck (MRK) is known as MSD outside of North America.

Shanghai Laekna Therapeutics has raised $61 million in Series D funding for its next-generation drugs for cancer and liver disease (see narrative). Founded in 2017, the company has built a portfolio of 14 new drug candidates, including six clinical programs, three of which are multi-regional clinical trials (including a pivotal trial). Laekna acquired at least four drug candidates from Novartis: an androgen blocker in 2017; two Akt inhibitors in 2018; and an anti-PD-1 antibody in 2020. The company’s latest funding was led by CS Capital and joined by Worldstar and Infinity Capital.

Shanghai Henlius Biotech (HK:2696) has signed a $55 million agreement to license rights for three biosimilar drugs in 16 Latin American countries to Eurofarma, a Brazilian pharmaceutical company (see narrative). Eurofarma will hold the marketing rights to the three biosimilars to the drugs initially developed by Genentech (OTCQX: RHHBY): Rituxan (rituximab), Herceptin (trastuzumab) and Avastin (bevacizumab). Previously, Henlius had licensing rights to some of the drugs in other South American countries, as it does in major markets around the world. Henlius develops biosimilars, bio-betters and novel biologic candidates.

Shanghai Belief Biomed reported that positive results from a researcher-led clinical trial of its gene therapy for hemophilia B have been published in The Lancet Hematology (see narrative). In ten patients with moderate to severe hemophilia, there were no bleeding incidents for more than one year of follow-up after a single treatment with BBM-H901. The therapy was effective within 24 hours and caused no significant side effects. Belief Bio said the trial was the first intravenous injectable hemophilia B gene therapy product developed and tested in Asia.

Inmagene, a Shanghai-San Diego biopharmaceutical company, has received approval to start a US phase I trial of its third-generation BTK inhibitor (see narrative). The company describes IMG-004 as a highly selective, brain-permeable, reversible non-covalent small molecule inhibitor for inflammatory/autoimmune diseases requiring long-term treatment. IMG-004 is one of four new preclinical immunological candidates Inmagene in-licensed from HutchMed last year in a deal worth up to $920 million. BTK, a non-receptor intracytoplasmic tyrosine kinase, is involved in innate and adaptive immune responses of specific immune-mediated diseases.

German companies Bayer AG (OTCPK: BAYZF) and Merck/MSD have received approval to launch a new cardiovascular drug in China (see narrative). Verquvo™ (vericiguat) is a soluble guanylate cyclase (SGC) stimulator indicated to reduce the risk of hospitalization or IV diuretics in patients with symptomatic chronic HF and reduced ejection fraction. Patients are prescribed the drug following a decompensation event. Verquvo’s new mechanism restores the defective NO-sGC-cGMP pathway, which plays a critical role in the progression of heart failure by worsening its symptoms. Verquvo has been approved as an addition to the standard of care.

Shanghai Ascentage Pharma (HK:6855) reported that olverembatinib effectively inhibited cytokine release storm in a preclinical test of SARS-CoV-2 Omicron variant (see narrative). The study was conducted by researchers at the Fred Hutchinson Cancer Research Center in Seattle. Olverembatinib is already approved in China for two forms of chronic myeloid leukemia. Although most COVID-19 patients only develop mild to moderate symptoms, 15-20% of them experience the cytokine storm-induced hyperinflammation, which leads to respiratory failure. Ascentage said it plans follow-up studies of olverembatinib in patients with severe cases of COVID-19.

Zenas BioPharma has filed an IND in China for phase I/II trials of a therapy for thyroid eye disease (TED) (see narrative). Zenas is a Shanghai-Boston biopharmaceutical company specializing in immune therapies. ZB001 is a differentiated humanized mAb targeting the insulin-like growth factor-1 receptor (IGF-1R) for PDD, a debilitating autoimmune disease that causes inflammation and fibrosis in the eye socket. PDD can cause double vision, pain, and blindness. Zenas has acquired greater Chinese rights to ZB001 from Viridian as well as other compounds targeting IGF-1R in non-oncology indications.

Editor’s note: The summary bullet points for this article were chosen by the Seeking Alpha editors.

The last hope against the strange headaches that cause cries of pain: “It was impossible to sleep or live” | science and technology