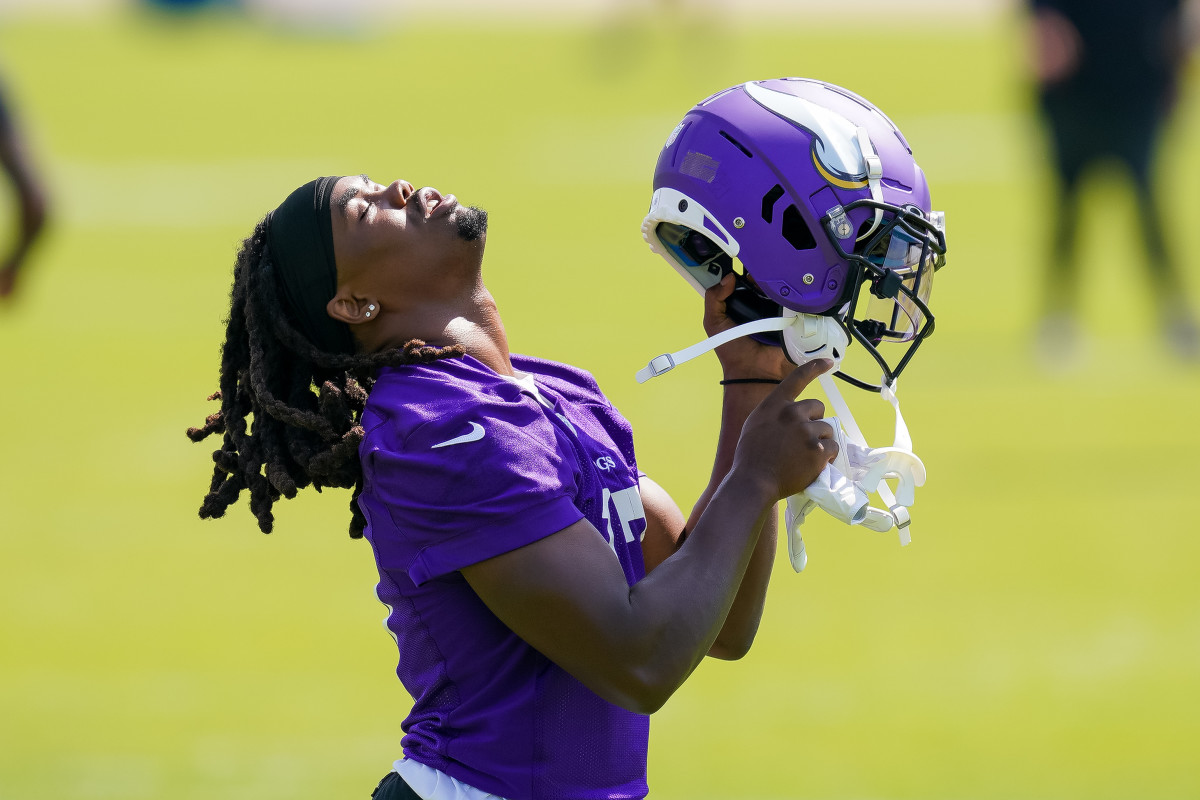 As soon as Justin Jefferson suffered a serious shoulder injury during Friday practice at Vikings training camp, everything else seemed trivial. The only news that really mattered was whether Jefferson was going to be okay.

The verdict on this front is pretty positive, all things considered. Jefferson has a sprained AC joint and will likely be missing somewhere between two and six weeks, pending further testing this weekend. It’s a notable injury that puts Jefferson’s availability in Week One into question and could force him to play despite the pain this season, but it could have been a lot worse.

For everyone still on the ground, the train continued to move forward. Players vying for places on the roster weren’t concerned about Jefferson’s absence; they had a job to do.

The Vikings camp’s third padded training session – and the ninth overall – took place in the hottest conditions yet. The sun was beating down on an almost cloudless sky making it much hotter than 84 degrees. This intense heat may have caused Adam Thielen, Cameron Smith and Cameron Dantzler to quit training prematurely.

The only player not to train in any capacity was linebacker Anthony Barr, for reasons unknown. Dede Westbrook, Christian Darrisaw and Riley Patterson were all limited in their participation, taking no live reps. Michael Pierce, meanwhile, took a few live reps for the second day in a row.

Let’s move on to my take out.

The “other” large receivers take advantage of the opportunities

With Jefferson coming out about halfway through the live portion of practice and Thielen also being called back, there were plenty of reps for KJ Osborn, Ihmir Smith-Marsette and Chad Beebe. It was the trio that played with the starting offense throughout practice.

All three have had their moments, but Smith-Marsette stood out the most for me. The Iowa rookie made a nice catch for a Jake Browning touchdown during the 7v7 drills, eliciting applause from the large crowd in attendance. He later showed his slyness in the open field by knocking Dantzler out of his shoes after catching an 11-on-11 Cousins â€‹â€‹pass.

Smith-Marsette had a strong first camp for a fifth round pick. He’s dangerous with the ball in his hands and it looks like he could become a reliable all-round receiver over time. He will also be a factor in the return kick competition.

The Amazing Osborn Camp doesn’t need much explanation from me if you’ve been reading my recaps every day. He’s likely the favorite for Mr. Mankato’s unofficial prize heading into the final week of camp and had another handful of impressive catches on Friday. Beebe hasn’t stood out as much, but he probably also has a place in the roster if the Vikings keep six wide receivers.

Bashaud Breeland shows off his physique

Cameron Dantzler stood out with a pair of interceptions yesterday and made a few more plays on Friday. But it was the veteran Breeland who really caught my eye with his physique and stiffness in the blanket this particular afternoon.

Breeland, a late free agency pickup this year, showed throughout camp why the Vikings covet him. Not only is he a reliable cover guy with high school balling skills, he’s not afraid to approach the line of scrimmage and stop the run. This type of mentality goes a long way with Mike Zimmer.

Breeland was everywhere on Friday, recording multiple pass breakups and entering the mix against the run. He seemed to come alive with pads a bit, letting his physique shine. Yes, he was involved in Jefferson’s injury, but it is by no means his fault. Breeland was just playing football.

Here are some of his highlights from Friday’s practice:

The competition between Dantzler and Breeland for the outside cornerback position against Patrick Peterson has been entertaining so far, and it should continue. Regardless of who wins, both guys will see the pitch in abundance throughout the season. With that trio and that Mackensie Alexander slot wedge – who had a really good camp – the Vikings could have the most talented wedge they’ve had in the Zimmer era, with all due respect to the group. 2017 by Alexander, Xavier Rhodes and Trae Waynes.

No more big plays by the running backs

The two biggest question marks facing the Viking offensive right now, in my eyes, are pass protection and Justin Jefferson’s health. One area that doesn’t worry me too much is ground play.

As has been the case with much of the camp, the Vikings got big plays from Dalvin Cook, Alexander Mattison and Kene Nwangwu – who appear to be retiring from Ameer Abdullah for the RB3 position – on Friday.

The first was a big run from Mattison which he bounced off the right side.

It shouldn’t be surprising that Cook tore several large pieces from the ground throughout the day. Nwangu has also shaken things up with his speed, especially in screen play. The Vikings worked on multiple screens on Friday, which is a great way to use their athletic offensive linemen and get the ball into the hands of Cook and their other RBs.

I wouldn’t be too concerned about the Vikings’ run defense, given Pierce was a bit limited and Barr was absent.

Saturday’s practice will take place at US Bank Stadium at noon. It won’t be a scrum like the Vikings did last year, but Zimmer has said they will be working a lot on play situations.

Thanks for reading. Make sure to bookmark this site and check back daily for the latest Viking news and analysis throughout the season. As well, Follow me on twitter and don’t hesitate to ask me questions about it.