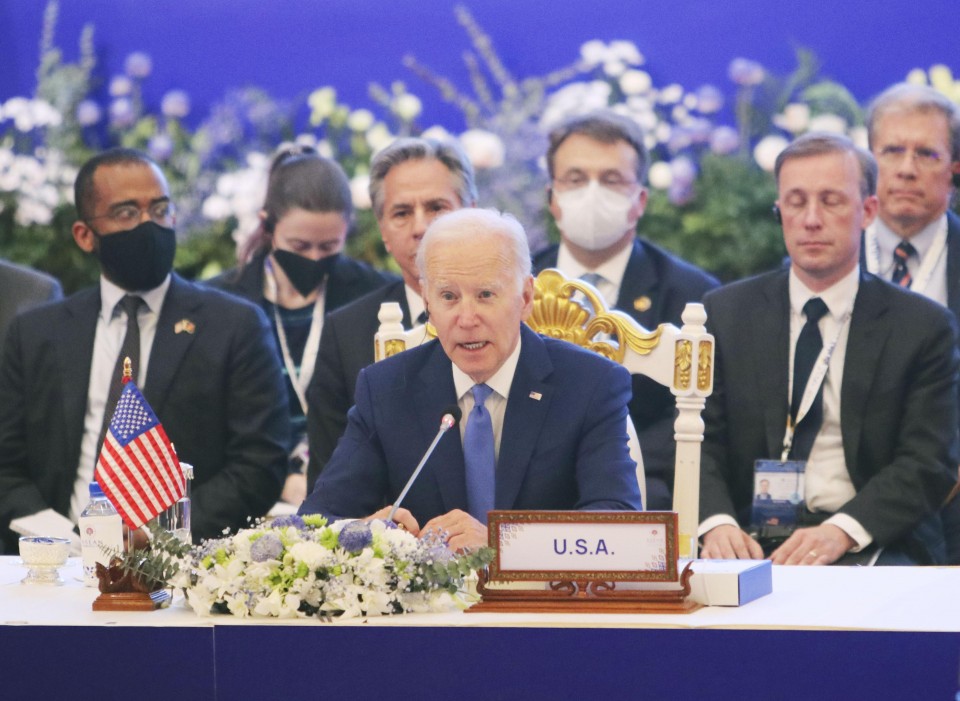 US President Joe Biden and leaders of the Association of Southeast Asian Nations on Saturday formally elevated their ties to a “comprehensive strategic partnership” and agreed to advance maritime and economic cooperation, stressing the Washington’s deeper engagement in the region amid China’s growing influence.

Attending the annual US-ASEAN summit in Cambodia, Biden hailed the upgrade of their relationship to “strategic partnership” status, saying it marks “a new era” in their cooperation.

“Together, we will tackle the biggest issues of our time,” Biden told the meeting, referring to the need to defend against “significant threats” to the rules-based international order and build an Indo-Pacific. “free and open, stable and prosperous, resilient and secure.”

U.S. President Joe Biden (C) speaks during a meeting with his counterparts from the Association of Southeast Asian Nations November 12, 2022, in the Cambodian capital of Phnom Penh. (Kyōdo) == Kyōdo

The latest development showed how the United States and China are vying for influence in the fast-growing Southeast Asian region. China already elevated its relations with the 10-member group to a similar status last year.

China is ASEAN’s biggest trading partner, but its assertive behavior has also created friction, with Beijing having conflicting territorial claims with four bloc members – Brunei, Malaysia, the Philippines and Vietnam – as well as Taiwan in the South China Sea.

It is his first visit to Southeast Asia since taking office in January last year, with previous annual regional gatherings held virtually in the midst of the coronavirus pandemic.

In a joint statement released after Saturday’s meeting, the United States and ASEAN agreed to promote maritime cooperation by upholding freedom of navigation and overflight, as well as working together to improve “maritime domain awareness.” which could help in the fight against illegal and unregulated fishing.

The United States is concerned about China’s role in exploiting global fisheries and its involvement in illegal fishing activities.

White House national security adviser Jake Sullivan said using radio frequencies from commercial satellites would allow tracking of “dark shipping,” that is, when ships’ transponder systems are deliberately turned off to make their movements undetectable and are often a sign of potential illegal activity.

The White House also said the United States will work with ASEAN to create an “integrated electric vehicle ecosystem” in Southeast Asia by supporting the deployment of related infrastructure, a move that is also intended to help members of the association to reduce emissions while increasing connectivity.

In discussions with his ASEAN counterparts, Biden would also likely have raised the situation in Myanmar following a military coup last year, hoping to pressure the junta to return the country to a democratic path. .

In May, Biden hosted a special summit meeting with ASEAN leaders in Washington, where they pledged to forge a “comprehensive strategic partnership” at the U.S.-ASEAN summit in November.

The United States, Japan and South Korea will hold a trilateral summit on November 13 in Cambodia

AREDS vitamins have no effect on glaucoma |