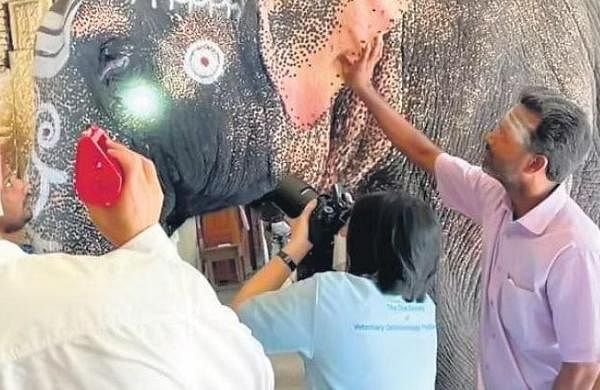 CHENNAI: A seven-member team of expert Thai vets has ruled out surgery to treat Madurai Parvati temple elephant’s rare visual impairment, saying it could cause more harm than good. Parvati, 24, from Arulmigu Meenakshi Sundareshwarar Temple in Madurai, had been diagnosed with a rare case of lens dislocation and cataract; she lost 60% of her vision in her left eye and 20% in her right eye.

In an exclusive interaction with TNIE, Dr. Aree Thayananuphat, senior ophthalmologist, and Dr. Nikorn Thongthip, associate professor at the Faculty of Veterinary Medicine, Kasetsart University of Thailand, said that the innermost layer of the cornea of ​​his left eye was damaged. The dislocated lens moved between the front and back of the eye. It touched the cornea, causing blurred vision.

“In such cases, vision cannot be improved. Surgery is an option, but it is fraught with risks. Surgery to remove the lens can lead to vitreous and retinal detachment. If this happened, the eye would become permanently blind.

After weighing the odds, the Thai team decided against recommending surgery for the animal and instead prescribed topical anti-inflammatories that will significantly slow the deterioration of the elephant’s vision.

The team gave their findings after a discussion with Dr C Ramani, Head of Veterinary Surgery and Radiology at Madras Veterinary College who has been treating the elephant for two years, and Dr KK Sarma, a recipient of Padma Shri of Assam popularly known as the elephant doctor. Sources said Dr. Ramani will soon submit a report on the examination of the animal to the Tamil Nadu Veterinary and Animal Science University.

Dr Aree, who has decades of experience treating animals with eye problems, said lens dislocation and cataracts were very rare in elephants. “Of the 1,478 captive elephants in Thailand, we found lens dislocation in only four and mature and hyper-mature cataracts in seven. We treated one elephant with similar conditions to Parvati about seven years old and the animal is still able to see.

“We need to constantly monitor the elephant for any signs of a corneal ulcer and give him topical antibiotics if needed. We cannot completely stop lens movement from the posterior chamber to the anterior chamber of the eye,” Dr. Aree told TNIE.

Dr Nikorn Thongthip, who leads the team, performed the world’s first bladder surgery on an elephant and removed a 1.7kg stone. The doctor said that Parvati was a relatively young elephant. His other sensory abilities would compensate for the partial vision loss. “If we can stop or slow the loss of vision, Parvati’s daily routine will not be hampered, at least for a few more years,” The Thai team’s visit was facilitated by Nitirooge Phoneprasert, Consul General of the Consulate General Royal Thai in Chennai, at the request of State Finance Minister Palanivel Thiaga Rajan.

Elephant found dead in O-Valley
Coimbatore: A 16-year-old female elephant was found dead on Sunday in Choondy, bordering O-Valley Forest and Naduvattam, Gudalur Forest Division. A fall from a height is suspected to be the cause of death. In the presence of a local NGO and villagers, veterinary assistant K Rajesh Kumar performed an autopsy on Monday. According to the veterinarian, the animal slipped from a height and died from a head injury. “We suspect the animal could have been pushed by a male during mating.”