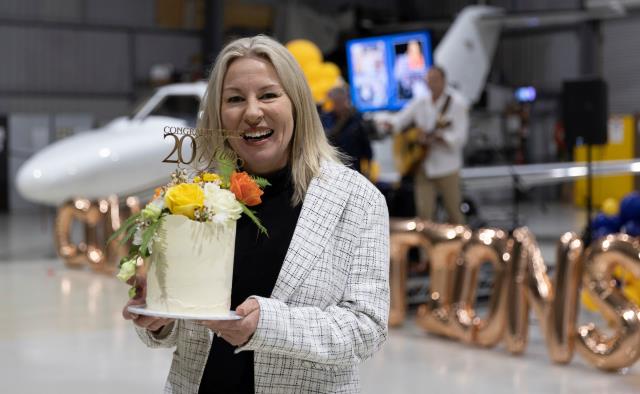 Standing with his colleague during a shift at a resort in Noosa, his work colleague noticed something was wrong with Pauline’s left eye.

“My eye had turned black and purple,” Pauline recalls.

“I went to see my optometrist and he confirmed that I had retinal detachment and I was advised to fly straight to Brisbane for surgery to save the permanent loss of sight.

“I was shocked and scared. All I could think about was not seeing my grandchildren.

Unaware of the increase in eye services on the Sunshine Coast, the 60-year-old was referred by the Brisbane team to eye surgeon Dr Warren Apel from the Caloundra Health Service.

“I was booked that week on October 1 and was amazed to arrive home hours after surgery,” she says.

The successful procedure gave Pauline a 90% return of vision provided she met the recommended recovery time.

“It took a mountain of discipline over the two months. Mentally, it was one of the biggest hurdles in my life not being able to do regular things like work, exercise, and cooking.

Wish List CEO Lisa Rowe says a recent funding boost of $70,000, plus $430,000 raised through The House the Coast Built appeal in 2011 with Ausmar Homes, has improved services with state-of-the-art medical equipment, including sight-saving lasers.

“This equipment has changed the lives of thousands of locals and they have had access to state-of-the-art treatment right here on the coast without the inconvenience of traveling to Brisbane,” Ms Rowe said.

But there is still one item on the charity’s ‘wish list’ – a $48,213 laser to benefit patients at Sunshine Coast University Hospital.

“Given all that I have been through, I owe a tremendous debt of gratitude for the caring and attentive guidance of Dr. Apel and his team, and to Wishlist for funding the equipment necessary to make my procedure possible. “, adds Pauline.

Help patients like Pauline in need of emergency eye surgery on the Sunshine Coast by donating to wishlist.org.au.