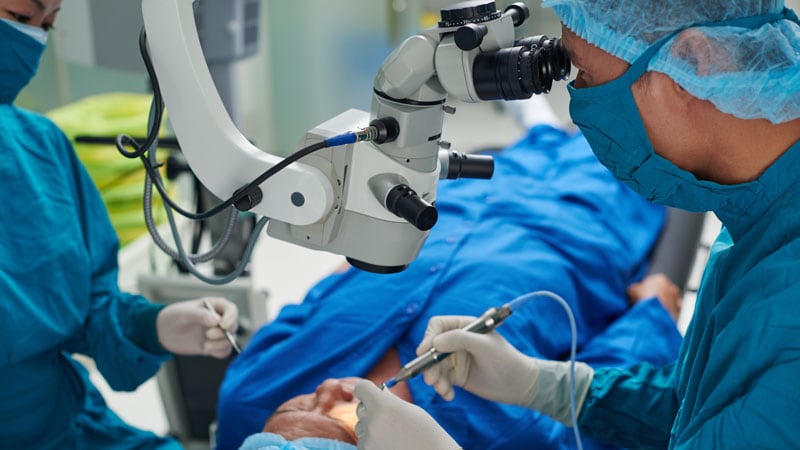 Should patients have cataract surgery on both eyes at once?

age related cataracts usually affect both eyes. In most cases, the cloudy endogenous lens is surgically replaced with an artificial intraocular lens (IOL), with a few weeks between eye surgeries. However, cataract surgery can also be performed on both eyes on the same day, with potential advantages and disadvantages.

A recent Cochrane Review concluded that, overall, there are unlikely to be large clinically important differences between the results of the two approaches. However, the quality of evidence for the study results summarized in the systematic review was rated as moderate to very low. German professional societies still do not recommend simultaneous bilateral cataract surgery.

In contrast, a possible disadvantage of ISBCS is the risk of both eyes simultaneously developing postoperative complications. Moreover, the simultaneous method makes it impossible to use the visual acuity of the first operation for the second operation.

In this context, the aim of the Cochrane review was to find out whether the ISBCS was just as safe, effective and cost-effective as the DSBCS. To do this, they looked at 14 studies from nine countries (Canada, US, UK, Finland, Sweden, Spain, Czech Republic, Iran and South Korea) that juxtaposed results from the two methods. The review authors compared the studies and assessed the informative value or evidence of the results of the individual studies.

Cochrane review authors reported the most important outcomes, although almost always with the caveat that the evidence was rated as moderate, poor, or very poor. The type of procedure (ISBCS or DSBCS) seemed to make little or no difference in the emergence of endophthalmitis (a fairly rare but much dreaded complication of cataract surgery) within 6 weeks of eye surgery. None of the studies reported bilateral endophthalmitis.

Even for other complications occurring up to 3 months postoperatively, virtually no difference was discerned between the two methods, although the quality of the evidence was rated as very low for both the randomized and not randomized.

With respect to procedural costs, ISBCS was reported to be less expensive than DSBCS, although a single study also found greater cost-effectiveness for ISBCS.

The review authors explained that most of the study results were limited by a small number of cases of endophthalmitis overall, variability in outcome assessments such as postoperative complications, and corrected visual acuity of optimally, and the lack of certain data in which the reviewers were interested, among other considerations.

“In Germany, there is very little data on ISBCS because it’s hardly a topic here,” said Thomas Kohnen, MD, PhD, of Frankfurt University Clinic. Medscape Medical News. Kohnen is chairman of the German Commission for Refractive Surgery (KRC), established by the German Society of Ophthalmology (DOG) and the Professional Association of German Ophthalmologists (BVA).

In Germany, the ISBCS is not necessary for several reasons. “We have a very good medical infrastructure with extensive and fast eye care, so even people living in the countryside don’t have to travel great distances or experience long waiting times for a first or second cataract surgery, which is different from many places abroad.”

Second eye cataract surgery (in the standard version with implantation of monofocal artificial lenses) is just as well funded by insurance companies in Germany as the first, Kohnen said.

Kohnen thinks there are also legal aspects at play in the reluctance of German ophthalmologists to endorse the ISBCS. “The procedure with bilateral operations on the same day is not recommended in the guidelines of our professional societies, [because] any complications arising after the operation could potentially result in lengthy legal liability proceedings for the surgeons.”

Indeed, serious complications such as endophthalmitis with risk of blindness are very rare, but also not excluded. “It is of course particularly dramatic if such an event occurs in both eyes at the same time.” Other postoperative visual disturbances could develop through cystoid macular edema or corneal endothelial decompensation, for example.

But possible complications are not the only reason why Kohnen advocates that specialists first calmly wait for the results of the first cataract operation before starting the operation on the second eye. This approach is also particularly relevant for patients who have chosen to have a multifocal or other high-end lens implanted. “Patient satisfaction with the new lens is an important topic that may influence their decision for the future lens of the other eye still to be operated on.”

Sequential bilateral cataract surgery with two, mostly outpatient, operations several days to several weeks apart is the norm in Germany. Nevertheless, there are exceptions to this procedure in which medical, social or personal reasons require that both eyes be operated on within a short period of time, under General anaesthesia in a single session, or with a gap of one or two nights. These reasons could include, for example, surgery on patients with disabilities (such as Down syndrome), childhood congenital cataracts, or in patients under extreme time pressure for the procedure.

Nor is the COVID-19 pandemic an argument in favor of ISBCS, Kohnen said. “By implementing a hygiene concept specially designed for COVID-19, in our clinic, we were able to treat patients despite the pandemic and continue to ensure the highest level of patient safety and staff protection. In this way, the pandemic has not changed anything for us since DSBCS has continued to be the clear preference over the simultaneous variant of surgery.”

This article was translated from Medscape German edition.

Misalignment of the eyes can cause serious problems