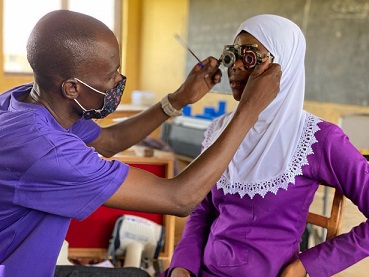 He said prioritizing eye care would help identify potential eye diseases in time for effective treatment to prevent complications and partial or total loss of vision.

Dr Addy said this during a press briefing in Accra on Thursday ahead of the World Sight Day commemoration on October 14, 2021.

The commemoration aims to raise awareness of blindness and visual impairment as public health issues and to influence governments, ministries of health, policy makers and organizations, among others, to participate and allocate funds to blindness prevention activities.

Dr Addy said it was important for people with eye problems to avoid purchasing medicated glasses from roadside vendors and to seek appropriate care at approved health facilities.

He also advised women to refrain from using cosmetics such as artificial eyelashes, which often caused corneal damage leading to scarring and infection.

Dr Addy stressed the importance of regular antenatal and delivery services in approved health facilities to prevent infections that could lead to long-term eye disease in babies.

“You should also avoid applying non-prescribed medications and concoctions to children’s eyes as they can lead to infections and blindness.”

He said 36 million people worldwide were blind, with another 217 million having far-reaching moderate to severe visual impairment, 124 million with uncorrected refractive errors and 85 million suffering from cataracts.

Dr Addy said 55% of people with moderate or severe visual impairment are women, with cataracts being the leading cause of blindness in most parts of the world.

However, studies have shown that over 75% of blindness and visual impairment are preventable, can be cured or corrected with the right medication, surgery, or reading glasses when caught early. -he adds.
Dr Addy said: “To address the big picture at national and global levels, we need to be mindful of our own eye health and therefore our theme for 2021 is all on #LoveYourEyes”, and that the event would focus, among others, on general awareness to ensure prevention of vision loss, protection, preservation, as well as prioritization of vision.

He said the causes of eye problems were aging, lifestyle, eye trauma, infections, and hereditary issues, but said most of them could be prevented by adopting healthy lifestyles and through early and comprehensive screening.

Dr Addy said a healthy, balanced diet was often the crucial step in maintaining a healthy weight, controlling obesity and preventing diseases such as diabetes, all of which could impact eye health, adding that foods rich in vitamins A, C, E, Omega 3 and 6 as well as zinc were all very important for eye health.

Others, like green leafy vegetables like broccoli and ‘Kontomire’, contained minerals that could delay age-related illnesses like cataracts and macular degeneration in the elderly, he said. .

Dr Anthony Ofosu Adofo, deputy director general of GHS, said the Service is working in a collaborative effort to ensure that refractive sunglasses can be obtained at pharmacies and even gas stations for safety reasons.

He urged the media to become key allies in strengthening advocacy for the support of government, businesses and individuals, to achieve universal access to health for eye health and to ensure that “everyone counts. “.