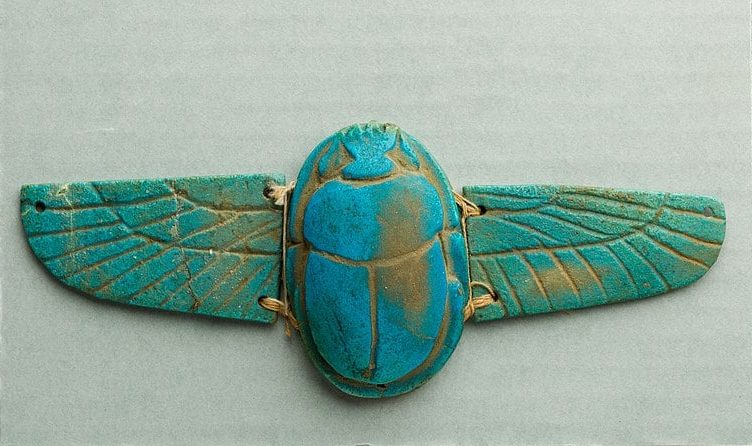 Believed to possess magical qualities, ancient amulets were once widely used. They range from amber pendants worn during the Mesolithic Age of Denmark to the evil eyes of ancient Greece.

Throughout ancient times, from the Mediterranean to Egypt and the present-day Middle East, people believed that misfortune, including accidents, illnesses, and sometimes even death, was caused by external forces.

Whether it was gods or other types of supernatural forces (like a demon), people – regardless of their faith – were looking for magical means of protection against them.

While medicine and science were not absent in antiquity, they rivaled entrenched systems of magic and the widespread use of it. People consulted professional magicians and also practiced their own forms of folk magic.

Perhaps derived from the Latin word “amoliri”, meaning “to hunt” or “to avoid”, amulets were believed to possess inherent magical qualities. These qualities could be naturally intrinsic (like the properties of a particular stone) or infused artificially – with the help of a spell.

Not surprisingly, the use of amulets was an integral part of life in many ancient cultures. From jewelry and ornaments on buildings to papyrus bearing spells and even garden ornaments, they were considered effective forms of protection.

Amulets have been around for thousands of years. Amber pendants from the Mesolithic Age of Denmark (10,000-8,000 BC) appear to have been worn as a generic form of protection.

Jewelry and adornments referring to the figure of the scarab were also popular versatile amulets in Egypt, dating from the beginning of the Middle Kingdom (2000 BC).

Two of the most common symbols of protection are the eye and the phallus. One or both amulet patterns appear in many contexts, providing protection for the body (in the form of jewelry), a building (in the form of plaques on the exterior walls), a tomb (as an inscribed pattern) and even a cradle (such as a mobile or cradle ornament).

In Greece and the Middle East, for example, the evil eye has a history stretching back thousands of years. Today, the image adorns the streets, buildings and even the trees of villages.

The magic behind the evil eye is based on the belief that malice can be directed against an individual by a mean gaze. As a result, a “false” eye, or evil eye, absorbs malicious intent in place of the target’s eye.

The phallus was a form of magical protection in ancient Greece and Rome. The Greek sculpture known as “herm” in English worked as apotropaic magic (used to repel evil). Such artifacts, depicting a head and torso atop a pediment – often in the shape of a phallus and, if not, certainly featuring a phallus – were used as bollards to keep intruders out.

The implicit threat is that of rape; approach a space that is not yours and you could suffer the consequences. This threat was meant to be interpreted metaphorically; that is, a violation of the property of others would result in some form of punishment from the supernatural realm.

The phallus amulet was also popular in ancient Italian magic. In Pompeii, archaeologists discovered wind chimes called tintinnabulum (meaning “little bell”). These were hung in gardens and took the form of a phallus adorned with bells.

This phallic form, often transforming into bawdy forms, presented the same warning as the statues of Hermes in Greece. However, the comedic forms in combination with the ringing of bells also revealed a belief in the protective power of sound. Laughter was meant to ward off the forces of evil, as was the sound of chimes.

A scholarly view of magic is that it functions as the last resort for the desperate or dispossessed. In this sense, it presents itself as an action of hope, interpreted by some modern commentators as a form of psychological release from stress or a feeling of helplessness.

In the context of “magical thinking”, amulets may be rejected by critical thinkers of all stripes, but they remain in use around the world.

Often combined with science and common sense, but not always, amulets have made a resurgence during the COVID-19 pandemic. Amulets are equally diverse, in all shapes and sizes, and promoted by politicians, religious leaders and social influencers.

This necklace asks the question: where does alternative medicine end and where does the magic begin? This is not a new question, as there has been an intersection between magical traditions and medical knowledge for thousands of years.

In Babylon, circa 2000-1600 BC. And in one text, there is a “healer” who seems to play the role of magician and doctor simultaneously.

Other ancient cultures also practiced medical magic through amulets. In Greece, magicians prescribed amulets to cure the “wandering womb,” a condition whereby the womb was supposed to dislodge and travel throughout a woman’s body, causing hysteria.

These amulets could take the form of jewelry, on which was inscribed a spell. Amulets were also used to prevent pregnancy, as evidenced by a recipe written in Greek around the 2nd century BC.

Designed to ward off COVID-19, the papers represent the cross between magic and religion; a paradigm as ingrained as the confusion between magic and medicine in many historical and cultural contexts. Fortunately, face masks and hand sanitizer are also available at the temple.

Marguerite Johnson is a Professor of Classics at the University of Newcastle. This article was originally published in The Conversation and is republished under a Creative Commons license.