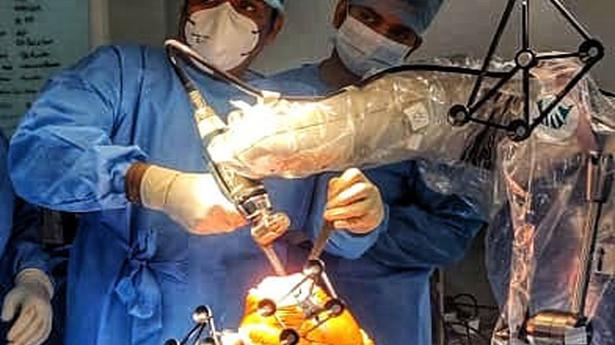 When a 66-year-old lecturer from Hosapete was advised by doctors to undergo knee replacement surgery for his chronic pain, the first question that bothered him was how long he could get back on his feet.

“I have heard that people cannot walk on their own for at least a month after the operation. I don’t want to be dependent on others for so long,” he told doctors.

When doctors at SPARSH hospitals, where he was undergoing treatment, told him that his recovery would be less painful and faster with robotic joint replacement surgery, he opted for it. “His knee replacement was performed using Mako Robotic-Arm assisted technology that allows surgeons to replicate precise bone cuts for patients, every time, first in a virtual 3D model and then in the operating room. He is upright, able to walk on his own in two weeks,” said Ravikumar Mukartihal, a robotic joint replacement surgeon at the hospital.

He said this technology-assisted procedure offers more precision and accuracy with less blood loss, in addition to a shorter hospital stay.

“In the event of knee or hip surgery, the Mako System software makes it possible to create a 3D model of the diseased joint based on the patient’s CT scan. The software then makes it possible to create a personalized virtual surgical plan for each patient, based on their specific disease state. This planning, done even before entering the operating room, helps to decide on the most accurate bone cuts and implant alignment,” explained Dr. Mukartihal.

Vishal Rao US, Director of Head Neck Oncology – Robotic Surgery at the HCG Cancer Center, recalled, “During my formative years, I only had two small eyes and two large hands at my disposal. Today, I have a robot assisting me with a big, powerful eye and two small nimble hands.

Somashekhar SP, Chairman of the Medical Advisory Board and Global Director of the Aster International Institute of Oncology, said more patients are now accepting robotic surgeries mainly due to shorter hospital stay, lower risk of complications and a quick recovery. “Last year, 100 new robots were introduced in India in private and public hospitals,” he said.


Naren Shetty, vice president and head of cataract and refractive surgery at Narayana Nethralaya, said robotic-assisted smart tools are widely used in ophthalmology. “Femtosecond laser-assisted cataract surgery is an innovative bladeless surgical option for cataract patients. In this surgery, a laser machine is first used to make the incisions, create an opening in the lens capsule and break the cataract into smaller pieces. These incisions are precise, consistent and safer than manual incisions,” he said.

Mohammed Rehan Sayeed, Cardiothoracic Vascular Surgery Consultant at Manipal Hospitals (Yeshwantpur and Hebbal), said robotics are also widely used in Cardiothoracic and Vascular Surgery. “In case of bypass, the robot helps to remove the conduits, and without making a large incision or cutting through the sternum (with a small 5cm incision),” he said.

A word of warning


Hema Divakar, chair of the FIGO (International Federation of Gynecology and Obstetrics) Well Woman Healthcare Committee, said the growing popularity of robotic surgery may lead to an increase in irrational demand from female patients, which puts undue pressure on the surgeon. “This can lead to the irrational use of robotic surgery for fear of missing out. Apart from the cost of the machine, the expense involved in setting up a dedicated robotic surgery facility is colossal. The recurring cost instruments is much more concerning,” she said.

Be careful when choosing to prescribe opiates