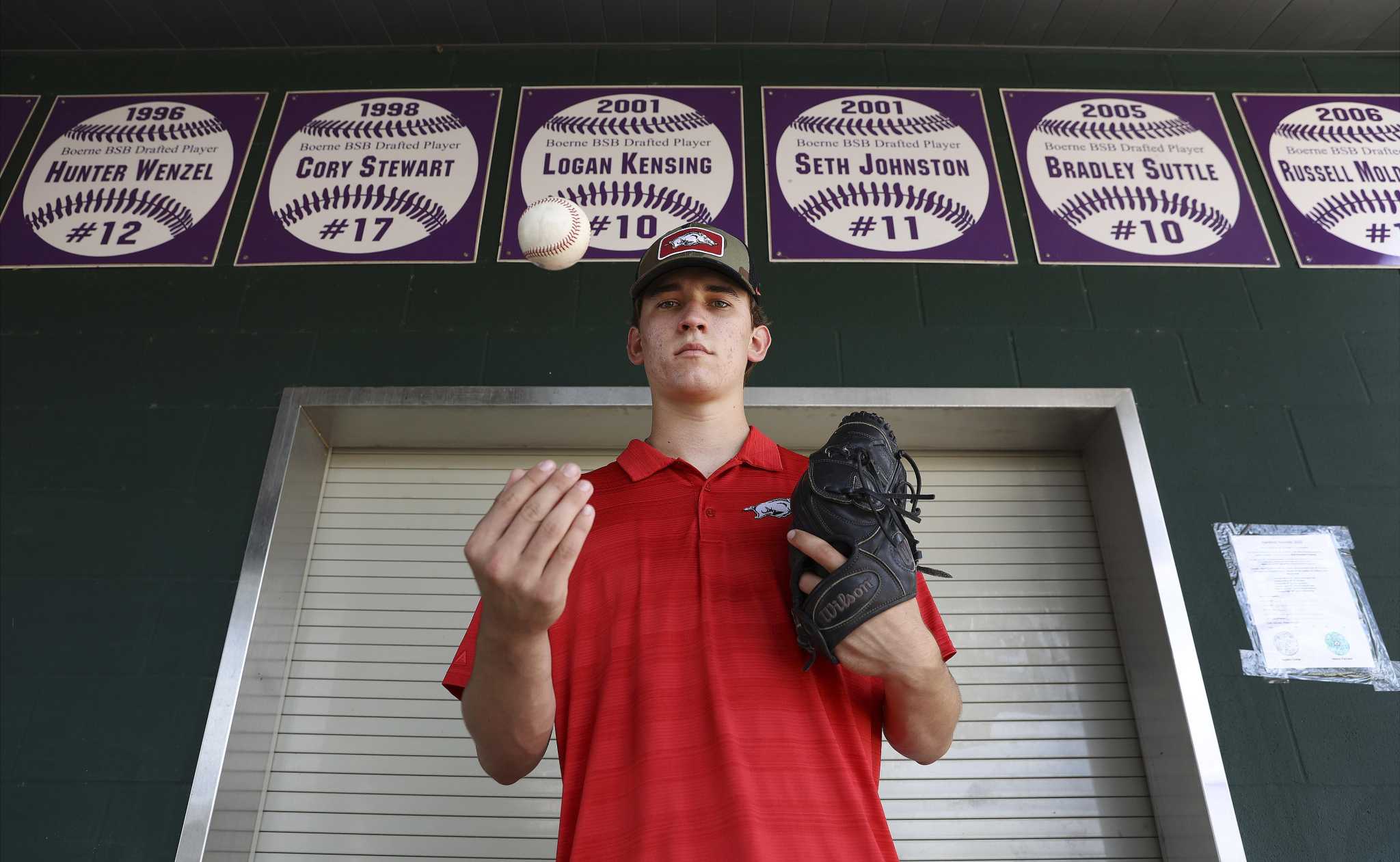 Phillips — Boerne’s right-handed pitcher and one of the top high school pitchers in the nation — didn’t turn down any of the youngsters who wanted his signature on their baseballs.

They knew they were in for greatness in Phillips, so projected to be a first-round pick in the Major League Baseball draft.

That trajectory dipped on March 29 when his right elbow exploded on a 1-2 slider in the third set of Boerne’s home game against Bandera.

“I felt like the Velcro had disconnected from my elbow — like it was tearing my arm,” said Phillips, a recent Boerne High graduate who signed with Arkansas in November.

His fingers tingled as the ball was released from his right hand.

“I tried to get rid of it, but I knew right away it was something big,” Phillips said.

Phillips pitched to another batter, throwing three sliders for a strikeout. Then he made his final exit from the mound as a high school player.

“I was very disappointed – not with myself, but just that my senior year was over,” Phillips said. “It really hit me when I sat down and said to the coach, ‘You have to warm someone up. I’m finished.'”

Phillips left the game after three perfect innings. He threw 30 pitches with 27 strikes.

“I’ve been a coach for a long time,” said Bill Merrell, who coached for 44 years, the last 13 with the Greyhounds. “I’ve never dealt with an arm like this, so we definitely weren’t going to ruin his arm.”

Although he did not receive an official medical diagnosis, Phillips knew he had pitched his last game as a Boerne Greyhound.

Yet he signed those autographs.

“It just shows his character and his morals and what a caring person he is,” said Gabe Herrera, one of Phillips’ teammates who recently graduated from Boerne. “He’s a great guy that everyone wants to be around. It didn’t surprise me at all, that’s what he did afterwards.

These kids didn’t know they would never see him again in high school.

“It wasn’t an embarrassment or anything like that,” Phillips said. “I was just disgusted. … When I was signing those baseballs, it was fun to laugh with them. … Even though it didn’t necessarily happen at the best time, it was kind of a positive during a difficult day.

The next day, Phillips was diagnosed with a tear in his ulnar collateral ligament. Nine days later in Houston, he had it fixed with Tommy John surgery.

Phillips was already heading in a good direction when he signed with Arkansas in November.

At that time, the professional scouts were calling. His baseball future was bright and clear.

Phillips’ fastball was consistent in the mid-’90s during fall showcases.

These calls have come in droves as the 2022 season approaches.

“For a while, I was really important,” Merrell said. “I was getting calls every day.”

These scouts wanted to know every time he was going to throw – a bullpen session, a practice, a scrimmage and games. Merrell mapped it and sent that information.

More than 35 scouts showed up for Boerne’s first scrimmage – a Feb. 8 game against Uvalde. Interest intensified as his fastball speed increased.

Phillips was undeterred by all the extra attention. The velocity of his fastball kept climbing. He threw a consistent record 90 early in the season.

Phillips hit 101 mph four times on March 10 in a 5-0 win over Corpus Christi Ray at a tournament in Victoria.

“Everything was going in the right direction,” Phillips said. “I was really excited because I thought different opportunities would arise.”

In other words, her draft value was going up.

Signing bonuses for first-round picks in 2022 are expected to range from $8.8 million for the first pick to $2.3 million for the 32nd pick — the last slot before the compensation round, according to The Athletic.

Phillips was 4-0 with 42 strikeouts, seven hits allowed and no earned runs in 231/3 innings before the end of his season.

The injury pulled Phillips in many directions. He considered postponing surgery and being a designated hitter for the Greyhounds. Hitting would not have aggravated his injury. Phillips was hitting .360 with three homers, three triples and four doubles.

Boerne entered the season as one of the favorites in Region IV-4A. The Greyhounds still had a good year, posting a 34-5 record and winning the district championship 28-4A at 9-1. Boerne qualified for the regional semi-finals before losing to Corpus Christi Callallen in three games.

“It was emotional for me,” Phillips said. “Obviously the injury was hard to bear, but it was more knowing that I was done playing with those guys. We’ve been playing together since I was 9, 10. Since my first year, we dreamed of our last year. This is what struck me the most, I was no longer going to take the field with them.

Phillips then made the first business decision of his life.

“I had to think about the next step on this journey, so the best thing to do was to get surgery right away and start the recovery process and not delay anything,” Phillips said.

Merrell said, “He might have swung a bat for us, but he had the draft coming up and his future was in front of him.”

Phillips gave himself 24 hours to sulk.

“I knew it was definitely taking a hit on my stock,” Phillips said. “I was upset about it. I had trained extremely hard. When I felt that everything was going in the right direction, that’s when it hit the hardest.

The night of his diagnosis, Phillips hosted a team dinner at this house. It was all smiles and jokes.

“He handled that situation better than I thought anyone could handle something like that, especially after where he was heading and then (having to have) Tommy John.”

Since his surgery, Phillips has spent weekdays in rehab in Houston and weekends in Boerne. Phillips said full recovery could take up to 14 to 18 months. That leaves Phillips in a precarious position when it comes to the MLB Draft which begins on Sunday.

ESPN ranks Phillips No. 66 among draft-eligible players. MLB.com has it at No. 62.

Both sources say the strength he has added to his 6-3 frame is a plus. His value to a major league team will depend on how much money they want to invest in a player recovering from Tommy John surgery.

Merrell thinks Phillips is worth the risk.

“There are so many benefits,” Merrell said. ” He is 19 years old. He had Tommy John surgery, so he got away with it. He’s just going to be stronger and more mature. I know professional teams that are looking to draft and let me rehabilitate in a professional setting.

Phillips doesn’t have a good idea when he’ll be drafted. His decision depends on a particular amount of signing bonus offered to him.

If that number isn’t met, he heads to Arkansas, a 2022 College World Series qualifier. If he does, he’ll be eligible for the draft again in 2024.

“I’m not very happy that it happened, but I know there will be a shiny door at the end,” Phillips said.