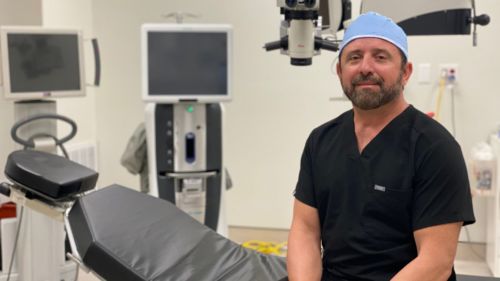 By the Carolina Journal team

A New Bern eye surgeon is asking the North Carolina Court of Appeals to reconsider its decision rejecting his challenge to the state’s certificate of need requirements.

A motion filed Monday calls for a rehearing of Dr. Jay Singleton’s case. A unanimous panel of three judges of the Court of Appeal dismissed Singleton’s lawsuit June 21st.

“The opinion of this Court made correctable errors with grave consequences,” wrote lawyers for Singleton of the Institute for Justice.

Singleton is challenging a North Carolina law requiring him to obtain a government certificate of need before he can perform most eye surgeries at his Singleton Vision Center. His lawsuit argues that the CON Act violates three sections of the NC Constitution.

“Dr. Singleton alleges that the CON Act, as applied, violates his rights to liberty under the law of the land (Section 19) and to be free from unconstitutional exclusive privileges (Section 32) and monopolies (Section 34 ),” according to the petition.

“This Court correctly concluded that ‘North Carolina’s CON statutes are restrictive, anti-competitive, and create monopolistic policies and powers,'” Singleton’s attorneys argued. “Yet the Court rejected Dr. Singleton’s claims for anti-exclusive and anti-monopoly privileges for failure to exhaust administrative remedies. The Court did so only because it misunderstood and overlooked essential points of fact and law.

Singleton’s attorneys explain how the Court of Appeal’s rehearing decision could determine the outcome of the case.

“It’s a major difference. Be that as it may, it is best that this Court now rule on whether Dr. Singleton made any claims under these important constitutional provisions,” according to the petition.

Singleton, a board-certified ophthalmologist, has owned and operated the Singleton Vision Center in New Bern since 2014. His “full-service” clinic offers “routine eye exams, infection treatment and surgical procedures,” according to the ruling. of the court.

CON law requires Singleton to perform most surgeries at Carolina East Medical Center in New Bern, “the only licensed provider with an operating room certificate of need located within the Tri-County Planning Area of ​​Craven, Jones Counties and Pamlico”.

Singleton filed suit in 2020 challenging the CON restrictions. Lawyers from the Institute for Justice helped him pursue the case.

“Plaintiffs acknowledge that they could have sought CON and have sought and challenged any administrative review to invoke or mature their constitutional due process claims,” ​​Judge John Tyson wrote for the Court of Appeals’ unanimous panel in June. “The plaintiffs did not file a CON request or seek or exhaust any administrative remedy with DHHS prior to filing the lawsuit. Plaintiff has failed to demonstrate the insufficiency of administrative remedies available under the law to consider and adjudicate his claims for continued deprivation of due process. »

“The remedy that plaintiffs are certainly and essentially seeking is that an administrative fact-finding record and a decision thereon be set aside and a CON be summarily issued to them by the Court,” Tyson added. “That we cannot do.”

“Had the plaintiffs requested an administrative review or if the procedures were found to be inadequate, their request would be ripe for the superior court to exercise jurisdiction over their procedural claims,” Tyson wrote.

Despite his decision against Singleton, Tyson raised concerns about North Carolina’s CON process.

“While counsel for the defendants clearly and correctly concedes that the CON bylaws are restrictive, anti-competitive and create monopolistic policies and powers for the licensee, and plaintiffs correctly assert that the CON process is costly and fraught with gross delays, and that service needs are not being met. Currently, such challenges may also be asserted before the General Assembly, committees, and against the agency where a factual record may be made,” Tyson wrote.

“At least 12 sister states, including New Hampshire, California, Utah, Pennsylvania and Texas, have re-examined the anti-competitive, monopolistic and bureaucratic health care benefit burdens of their CON statutes, and the scarcity created by and delays inherit [sic] in this system, and abolished the entire CON system within their states,” he added.

“The plaintiffs’ complaint also did not assert a violation of North Carolina’s unfair and deceptive trade practices or right-to-work laws,” he wrote. “The plaintiffs have also not asserted that they have requested the reclassification of certain surgical and treatment procedures under his medical or other licenses and certifications, which can be done safely at his center and clinic, without the need for a CON operating room.”

“Advances in less invasive and non-invasive technological procedures and treatments are developing rapidly and have reduced or eliminated the need for a traditional operating room and enabled ambulatory clinical environments for patients,” Tyson added.

“We express no opinion on the potential viability, if any, of the claims not alleged in this complaint,” Tyson wrote.

The Court of Appeal is not required to grant a new hearing.

Causes and when to call your doctor