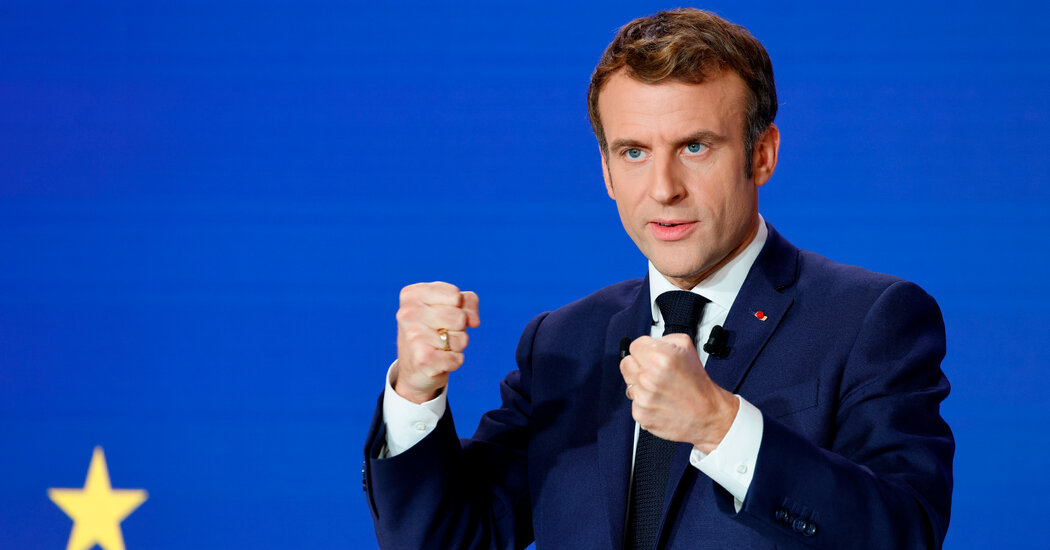 Macron presents the vision of a more assertive European Union

PARIS – President Emmanuel Macron, during a rare press conference, on Thursday called on the European Union to move from “a Europe of internal cooperation to a powerful Europe active in the world, fully sovereign, free of its choices and mistress of her destiny “. “

Speaking on the eve of the French presidency semester of the European Union, which begins on January 1, Macron said the slogan chosen for this period would be “revival, power and belonging”. Power is not a word often set up as a goal by a union born from the ashes of war.

The president’s confident tone during a two-hour meeting with journalists, the first half of which was echoed by his own speech, reflected his determination to forge “European sovereignty” as the only way for the continent to count on the 21st century between an autocratic regime China and the United States whose attention has drifted away from Europe.

Many Europeans have become convinced of the unreliability of the United States as an ally and protector, and of China’s economic and ideological threat – reasons for building a more independent Europe. But to what extent other European states, especially Germany, are ready to embrace Mr Macron’s vision is unclear.

For the Germans, who prefer their leaders to be publicly reserved to the point of blandness, Mr. Macron’s style may seem a bit boastful. The new German chancellor, Olaf Scholz, will meet the president on Friday during his first visit abroad.

The European presidency, which France has not occupied for 13 years due to the slow rotation between 27 members, is in a way a political tool for Mr. Macron insofar as the French presidential election will be held in April.

However, he refused to confirm his candidacy for re-election, swearing only that he would serve his five-year term “until the last quarter of an hour”. Mr Macron, 43, is generally expected to officially enter the race only in the first two months of 2022, leaving his opponents to slam each other in plain sight.

The president, whose tendency to equivocate on difficult issues has led him to be called president “on the other side”, has never wavered in his firm support for the European project, despite the growing power of a extreme right in France. whose banner is nationalism. He has long advocated “strategic autonomy” for Europe, making it less dependent on the United States for its defense.

His vision of a more assertive France, leader of Europe, could appeal to center-right voters. The retirement of Mr Scholz’s predecessor Angela Merkel, long regarded as the de facto leader of the EU, leaves Mr Macron more leeway.

The cascade of goals he announced on Thursday testified to his determination to make an impact.

Among the plans presented by Mr. Macron were a Euro-African summit in February to “rebuild” relations and propose a “New Deal” for Africa; a security summit in March to galvanize joint European military exercises and the development of a shared defense industry; measures to make Europe “a digital power; the creation of a six-month “European civic service” for those under 25; and a tightening of the Union’s external borders while Europe is faced with migratory pressures that it has not been able to control.

“I am a proud European,” Macron said, describing how the continent came together to fight the pandemic. “It’s a beautiful thing, Europe.” He continued: “When you defend Europe, you have to defend it completely. You have to fix it. We have to face its flaws, its bureaucratic complexities, its deviations.

For Britain, which left the European Union last year and has since been embroiled in several fights with France over fishing rights, migrants and other issues, Mr Macron did not speak up. refrained from a few scathing words.

He accused Britain of applying an economic model that relies “on the illegal work of foreigners”. He suggested that Prime Minister Boris Johnson’s government was incapable of “good faith”. He said he couldn’t forget Britain’s role in this year’s Anglo-American sale of nuclear-powered submarines to Australia, which upended an earlier commitment to buy submarines. conventional French.

This submarine contract, he said, amounted to deliberately undermining a “French vision in the Indo-Pacific” and was “not exactly a blatant sign of friendship, to use a touch of understatement. “.

Mom was diagnosed with a brain tumor after a routine eye exam.