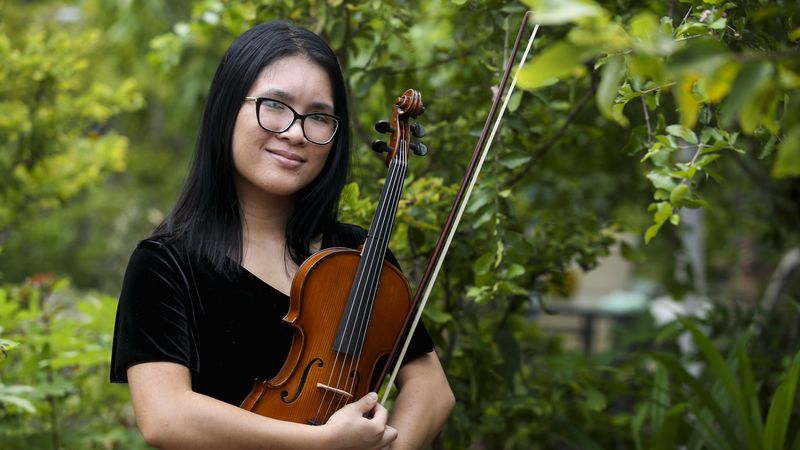 It was as if ants were crawling through his skin. Small dark red circles run down from her shoulders to her fingertips. Sometimes the bumps appear on his eyelids, chest, or legs. She was afraid of touching her own skin.

The only respite for Quynh-Nhu Dang is the viola. When the 18-year-old performs on stage, she feels confident. She feels the eyes of the audience shift from her skin to her viola. Then after his final musical note, his fears return.

Social networks make things worse. Dang sees the stories of girls with “perfect skin” and wonders why she can’t be like them.

It took four dermatologists and eight years to find an answer.

In 2019, Dang was diagnosed with keratosis pilaris – a skin condition also known as “chicken skin” – which causes patches of rough, small, acne-like bumps. She has been living with it since she left Vietnam for Tampa at the age of 9 to find her father.

Dang felt lonely, but she wasn’t. Studies show that teens with skin problems can also suffer from anxiety and depression.

Nurx, a women’s telehealth network, says it has seen an increase in the number of girls between the ages of 13 and 17 seeking treatment for skin conditions, primarily acne.

The company says it recently conducted a nationwide survey of 900 patients that shows how skin conditions affect their lives. In the survey, 61 percent say that acne had a negative impact on an important event in life; 1 in 3 say they skipped a social event because of an escape; and 41% say they have heard rude comments.

Kristine Cooley, an advanced practice nurse from Tampa who works for Nurx, said she is also treating more teens for skin issues. She blames several factors: it can take months to see a dermatologist; the pandemic; lack of education on skin conditions; and social media.

â€œThey see what’s being seen on social media as what they should look like and that can make them feel even more negative about themselves,â€ Cooley said.

But there are ways to heal inside and out, as two Tampa Bay women discovered: Dang and Lindy Baker.

Baker remembers watching TV with his family when it was painful to open his arms. It was as if sharp fingernails pierced his skin.

She was 3 years old when she was diagnosed with eczema. It is a chronic and persistent inflammatory disease influenced by genetics and environmental factors. It disappeared soon after, but the pain and itching returned a decade later. Patches of dry, itchy rashes began to cover the 14-year-old’s body from head to toe.

Her daily life has become painful. She woke up surrounded by piles of dead skin. If she scratched it, she would bleed. Nothing was more painful than taking a shower; she said it was like someone was squeezing lemon juice into the open sores on her skin.

She fell into a depression. She kept the lights off when she used the bathroom so she couldn’t see herself in the mirror. She spent months inside Wesley Chapel’s family home, afraid to go out. When venturing outside, she always wore a green button-down jacket and jeans, even though it was 80 degrees outside.

â€œI felt so ugly,â€ she said. “I felt like Shrekâ€¦ people were sort of looking at me like, ‘What’s wrong with you? Is it contagious?'”

For a year, Baker resisted seeing a doctor. She didn’t want to believe that she was sick, that something was wrong with her. She was worried that people would judge her. A doctor said his eczema could be fueled by food allergies and recommended daily allergy shots and topical steroid creams to treat his condition – and hide it. But she didn’t want to keep covering her body.

â€œI don’t want to go back a little bit because I remember too many sleepless nights, embarrassed,â€ Baker said, â€œand feeling like no one understood or validated my pain.â€

A nutritionist helped her figure out what to cut out of her diet. Dairy products, shellfish, gluten and wheat came out. She has tried to combat environmental factors by avoiding places that she thinks make her sick or make her asthma worse. It still took months for her skin to heal. By the age of 20, she had only minor eczema spots left on her body.

Now 21, her eczema is barely visible. She is no longer afraid of seeing herself in the mirror or going out. There are still times when her skin flares up, but that doesn’t stop Baker from living her life.

She is now sharing her mental health journey on Instagram and trying to inspire other people living with eczema to be confident in their skin.

â€œTake a break from the reckless scrolling,â€ she wrote in an Instagram post. â€œStop comparing yourself to others. Spend time doing something you really enjoy doing. Talk to someone face to face.

Dang felt even more isolated after her first trip to Vietnam in 2014. A neighbor from her old village asked Dang if she had a sexually transmitted disease.

She said she felt a stranger to her culture and upbringing after seeing other Vietnamese women with “smooth and beautiful” skin that looked nothing like hers.

She began to wear long sleeve shirts and jeans. She stopped shaking hands. She tried to hide her condition.

But Dang has found his own balm: the viola. Between sheet music and classical tunes, Dang focused on his music rather than his skin. She believed that others would focus on her music as well, not on her skin.

After being diagnosed, her dermatologist recommended a topical steroid cream daily to relieve the itching and Eucerin lotion to help smooth her skin. The bumps, however, never went away, leaving the young girl even more frustrated.

â€œI just wanted it to stop,â€ she said.

Dang’s confidence in her own skin grew further as she became involved with local organizations like Teen Connect Tampa Bay and the Tampa Mayor’s Youth Corps. She no longer felt like “the Asian girl with a skin problem”.

She is starting classes at the University of South Florida this month. She’s still nervous about showing her skin, but she knows she’s not alone.

â€œNo one judges you as much as you judge yourself,â€ Dang said. “Do whatever makes you happy and don’t put other people in your practice.”

If you see this flower in your garden, immediately call the local authorities.