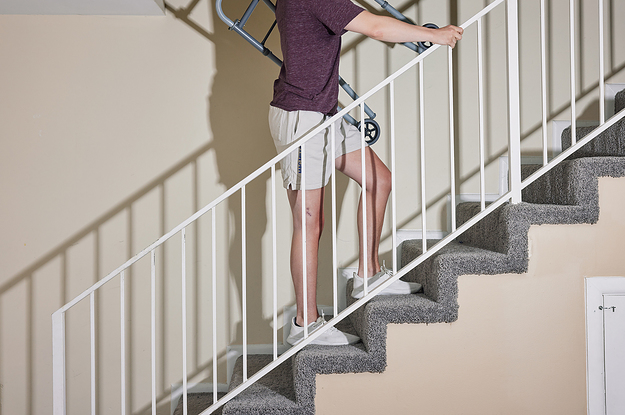 Dr Shahab Mahboubian, the orthopedic surgeon who operated on Scott, is something of a social media star. On Instagram, the 46-year-old Californian has more than 45,000 followers. On TikTok, another 50,000. Its handle is quite simple: @heightlengthening. On his social media pages, you can see him doing dances and answering questions about the proceedings.

Height-enhancing surgery isn’t all of Mahboubian’s practice. He said he does about 30 to 40 such surgeries a year. “I would say most of my work is still general orthopedics. I still do a lot of sports. Patients with shoulder, knee, back problems. I still see a wide range of orthopedic issues,” he told me in his office in Burbank, California. Still, judging by the large sign that reads “Height Lengthening Institute” at the door, it’s fair to say that it’s become his trademark. “It’s become a big part of my practice. This is what interests people the most. This is where I get most of my consultations,” Mahboubian said. He added that he had seen a marked increase in surgeries during the pandemic. “As a lot of people had more free time, they opted to have their procedure done,” he told me.

Although he has been performing the operation for over a decade now, heightening was not Mahboubian’s original plan. He first became interested in sports medicine, an essential part of the orthopedic profession. But he soon realized that was what the majority of his fellow doctors in training wanted to do. “I didn’t want to do the same things as all the other orthopedic surgeons, which is mainly joint replacements, fracture care or sports injuries. Those are the top three,” he told me. It was then that he found a scholarship focused on lengthening limbs and correcting deformities.

Surgical limb lengthening is not new. It has been around in one form or another for almost 100 years. People injured in military service or car accidents would get the procedure, often as a way to correct improper leg length. What is relatively new is the deployment of surgery for elective and cosmetic purposes — which is only about 15 years old. In other words, people are now choosing to have the procedure simply because they want to.

Mahboubian casually described the “minimally invasive” procedure as a man recounting his breakfast. “Through little little incisions, I surgically cut the bone,” he began. “Then I insert a rod – we call it a nail or rod – which goes inside the bone. The rod is magnetic and it has gears. Then there is an external device that communicates with the nail. And over time, little by little, it lengthens the nail. The lengthening happens gradually. “We usually say about a millimeter a day, until they reach the desired height.”

There is a cap on how high a patient can gain. “The maximum is 8 centimeters, because that’s the limit of the fingernail. Beyond 8 centimeters we see most complications.

Wait, I protested. “Minimally invasive” and “cutting the bone” are not concepts that naturally go together. “You want details on how you break your bone?” asked the doctor, laughing. “I make a small incision – a 1 centimeter incision – and basically what I’m doing is first weakening the bone by drilling into it. Using a small drill, I make a few drill holes. Then we use an osteotome, which is kind of like a chisel. The chisel is what cuts the bone. “It’s done surgically and very precisely,” he added.

Is the broken bone the most painful part of the recovery process? “When you cut the bone, you get swelling around that area, but that goes away after a few days. Then there’s the stretching pain, which is stretching pain,” the doctor said. But it’s tolerable because it happens very slowly.” Mahboubian is quick to recognize potential complications and how he seeks to resolve them. Anxious about infection? He immediately puts his patients on antibiotics. He puts patients on blood thinners because he there’s a risk of blood clots. There’s a risk of nails breaking, which is why patients have walkers. “As some patients lie down, they can make too many ‘bone. Others may not produce enough bone. To remedy this, he takes regular X-rays to monitor the progress of healing. “The majority of my patients,” he says proudly, “have no complications. Those who do, it’s either because they haven’t listened to me, or because they haven’t had the right therapy.

In social media posts, Mahboubian often appears in before and after photos with his patients. He is the reference point for the height they have gained. He is 5’9″, the average height for men in the United States. “I was a latecomer, so I was always the smallest of my friends,” he said. “So I got a lot of jokes and people talked to me during those stages of my life.” He said he had a growth spurt later in his teens, but since his years were shorter, he knows what his patients have been through.

Is it these years that pushed him to take an interest in this operation? “Perhaps subconsciously,” he said. “My motivation for entering this field was to change people’s lives for the better.” But it helps to have a point of reference for the frustrations patients express. “When they tell me their stories, I can relate to them.”