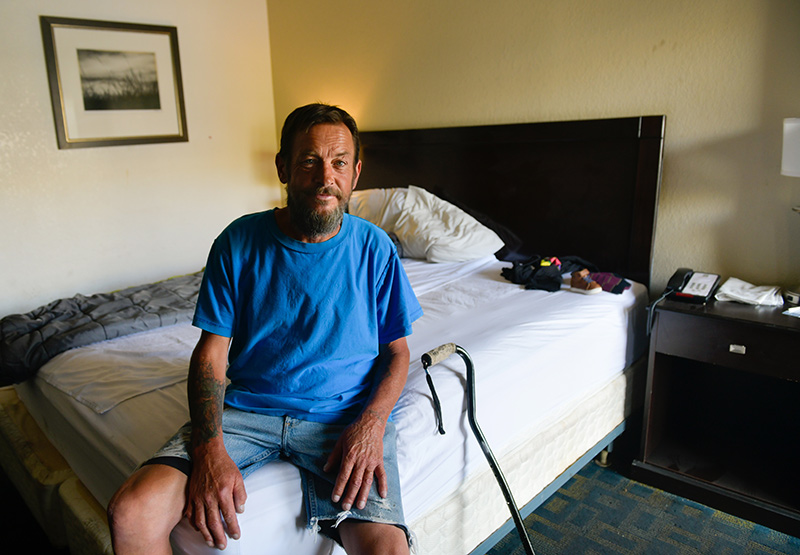 For people living on the streets, a path to housing and better health

David Shue was sleeping on cardboard behind an Aurora mall and drinking more than half a gallon of vodka and several beers a day last fall when he agreed to accept help from a kind social worker at the ‘hospital.

Months earlier, Dave had lost six toes, three on each foot, after spending hours outdoors during a freezing and wet spring snowstorm.

Living on the streets, shivering and waking up every hour during the night had become too difficult.

Dave had met his social worker, AK Kopperud, while he was being treated for frostbite and alcohol dependence at the University of Colorado’s UCHealth Hospital. The men stayed in touch.

Close to Thanksgiving, Dave was ready to accept help. AK had good news. Through a new housing transition program, AK was able to help Dave get on the path to permanent housing.

Dave had borrowed a friend’s phone and left a note with AK about where he lived. AK went looking for Dave and almost had to give up on finding him. Then, he dug behind the TJ Maxx store once more. He saw cardboard moving near a concrete stairwell, and a face appeared. It was David.

That day, AK connected Dave with social workers from the Colorado Coalition for the Homeless in Denver, who helped Dave find a room in a motel the city of Denver rented as part of the a program to get people off the streets during the pandemic.

Since then, Dave has been living at the motel west of downtown Denver and is now eligible for permanent housing. After getting a roof over his head, his health improved significantly.

“I haven’t had a seizure since I moved here,” he says. “I got all my prescriptions back. I take my medications more seriously.

Dave also hasn’t needed to go to the ER or stay in the hospital since he got his motel room. This means his health is better and taxpayers who fund Medicaid save thousands of dollars.

Although Dave has not completely given up on alcohol, he no longer drinks hard liquor or uses illegal drugs. He’s drinking a few beers a day. He keeps in regular contact with AK and his doctors and receives injections to treat spinal pain after a car hit him while he was riding a bicycle a few years ago.

Now 52, ​​Dave has a twinkle in his eye. He likes to make jokes about the little toddler boot he keeps on his cane. It’s a play on his last name. It’s a “Shue” wearing a nice shoe.

Dave now has a phone and calls his mother in Ohio every day to let her know how he is. He has a twin brother and the two have always competed in everything from household chores to sports. Dave started working when he was just 14, cutting grass and hauling lumber to construction sites. He applies that same work ethic to his life now. He wants to serve as a good example for others who are experiencing housing instability.

“I’m a competitive guy. I want to show other people they can do it,” Dave said.

“For the first time in my life, I’m doing this for me,” he said of his well-being and greatly reduced alcohol consumption.

Dave says having a home – even a small motel room – means everything to him.

“It’s security. This is my safe zone. I like to take showers. I like to be clean.

Once addicted to ‘everything’, now crisis free

Dave grew up in Ohio in a family where alcohol abuse was common. He first got drunk when he was 11 years old and eventually became addicted to almost every substance.

“I did everything there was to do. I’ve been through cocaine addiction, heroin addiction, alcohol addiction,” he said.

Despite this, Dave managed to work in construction for 27 years.

He came to Colorado from Ohio in 2001 and did well in finding construction work, but also racked up convictions on drug and driving in a stolen car charges.

Dave served time in county jails, then when he was released his drinking and other health issues worsened. As a result, he had multiple emergency room visits and long, expensive stays at various hospitals in Denver and Aurora.

By 2018, Dave’s second marriage had fallen apart. He was riding his bike while drunk when a car hit him. He suffered multiple injuries that still haunt him today.

Chronic homelessness and health issues became the norm for Dave.

In October 2020, he fell on a rock and broke his knee. He received treatment at the University of Colorado Hospital and had to spend weeks recovering. Doctors freed Dave, but his wound became infected while living on the streets. He returned to the hospital and was transferred to UCHealth Broomfield Hospital in December, where he spent weeks recovering.

Then in March 2021, Dave had his terrible encounter with frostbite. Paramedics again brought Dave to the University of Colorado Hospital. Medical providers removed her boots and found her toes frozen black. Dave then spent three weeks at the UCHealth Burn and Frostbite Center.

In addition to the chronic pain, Dave also suffered from regular seizures related to his drinking. Before getting his motel room, he says he had 43 seizures in a single year.

Dave still remembers the day he met AK in the hospital.

“I really knew he cared,” Dave said. “He was interested in helping me get off the streets.”

Dave told AK that he wasn’t ready to give up alcohol completely, but still wanted help.

AK had worked with many people like Dave for 11 years as a case manager and team leader at the Colorado Coalition for the Homeless before becoming a hospital social worker for UCHealth in 2018.

While working at the University of Colorado Hospital, AK found that many homeless people repeatedly sought treatment at the hospital, and AK and his colleagues had few options for them. help them leave.

He felt called to help.

“It’s my life’s work,” AK said of his advocacy for those in need.

So AK and his UCHealth social work managers, Amanda Van Andel and Katie Herrmann, worked with experts from the University of Colorado School of Medicine to apply for a grant from Colorado’s Medicaid agency, the Health Care Policy. and Financing Administration (HCPF). HCPF officials awarded the money to CU School of Medicine and the Housing Transition Program officially launched in August 2021. AK and two other social workers, Avery Perry and Lia Ryan, help patients make plans before leave the hospital. They try to help patients find stable housing so they can be healthier in the long term and don’t have to return to hospital repeatedly.

“UCHealth’s mission is to improve lives. How do we do it better? AK said.

Over the years, AK has learned the value of a “housing first” approach. Many people living on the streets struggle with complex issues such as addictions and mental illness. Without houses, it is difficult to work on other challenges.

“Having a home helps people move towards recovery and better health,” AK said. “Whether you’re an empathetic like me or a pragmatic realist, we all know that few people can engage in post-hospital care without a place to live. Giving people access to a safe physical space gives them peace of mind so they can do the hard work of taking care of their health.

Van Andel, who manages social work services for outpatient clinics at the University of Colorado Hospital, oversees the housing transition program. In addition to supporting patient outreach work, UCHealth funds beds at Beacon Place, a Colorado Coalition for Homeless Respite Program in Denver and Comitis Crisis Center, a homeless shelter near the hospital on the Anschutz medical campus.

Path to permanent housing with help from the Denver Homeless Coalition

On a recent visit to see Dave, AK marveled at the quality of his client.

“I’m so proud of you man,” AK said as he greeted Dave.

Dave’s feet are healing well from frostbite and spinal injections are helping to control his back pain. The contrast from months ago is striking.

“When I met Dave he was a chronic drinker. He went from riding his bike through hospitals, living behind a store and making a living to engaging with us and being healthier. He’s completely in full swing. boom,” AK said.

Dave likes to call AK with progress reports. AK credits Dave with all his accomplishments.

“My job is to provide people with alternatives. We are in the realm of opportunity. We offer pathways to recovery. What patients do with these opportunities is up to them,” AK said.

Dave is proud of his room at the motel. He puts it away and spreads his sleeping bag on the clean white sheets.

Out of habit, he always sleeps in the bag, not on the sheets.

As he inspects his room, he sees a house.

“I’m going to shed a tear and tell you, ‘I’m proud of myself.’ If it wasn’t for AK and the Coalition for the Homeless I would be homeless and stuck in a rut Now I have a bed, shower, fridge, microwave and counselors.