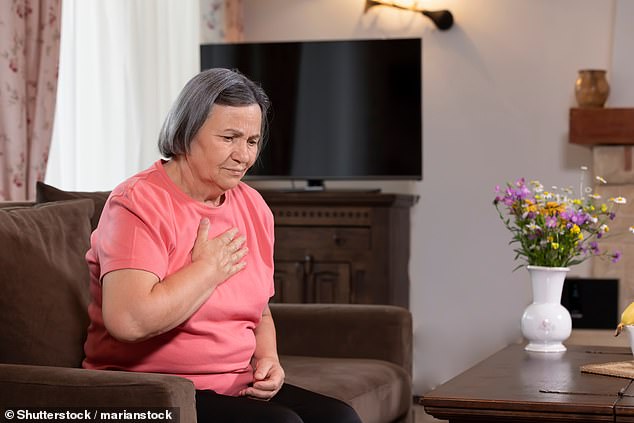 DR ELLIE CANNON: Why do I have tight chest pains now that I’ve cut down on my alcohol intake?

For the past month I have had a tight pain in my chest and my stomach has felt unsettled.

I used to drink three bottles of wine most weeks, but have recently reduced my intake – now I only drink once in a while.

The pain seems to have coincided with my different drinking schedule. Could the two be related?

Drinking more than the recommended amounts of alcohol over a long period of time can cause problems such as acid reflux and stomach ulcers, which can cause chest pain. (archive picture)

Three bottles of wine contain 30 units of alcohol, more than double the safe alcohol limit for an adult, which is less than 14 units per week.

If it is a regular consumption for a considerable time, it could cause problems.

One would be inflammation of the stomach and esophagus – conditions known as gastritis and esophagitis, which cause chest and stomach symptoms.

This inflammation causes pain, vomiting and, for some, bleeding.

It also causes acid reflux and stomach ulcers, which can lead to chest pain and unstable stomachs.

These symptoms all develop from drinking too much alcohol over the years.

Do you have a question for Dr. Ellie?

Dr. Ellie can only answer in a general context and cannot answer individual cases, nor give personal answers. If you have a medical condition, always consult your own GP.

They can show up once someone cuts because they become more noticeable – drinking less can make people more aware of what’s going on with their bodies.

We often see it when people give up unhealthy habits, like smoking: When you expect to feel better, you notice things you didn’t know before.

To determine if gastritis is the problem, a doctor may suggest an endoscopy to check for stomach inflammation or a trial of a stomach acid-suppressing drug, such as omeprazole.

A similar drug, esomeprazole, is available over the counter, so while waiting for an appointment, it’s worth trying to see if the symptoms go away.

Chest pain should always warrant discussion with a doctor, as it is associated with heart disease and may be angina – the type of chest pain that can precede a heart attack.

Excessive and sustained alcohol consumption would also expose some to this problem.

Last year I had private treatment for cataracts in both eyes.

The procedure has improved my eyesight so I don’t need glasses as much, but something is wrong.

It seems that there is not enough light and I have slightly blurred vision.

Should I contact my general practitioner or the private hospital?

Cataracts are very common as we age and occur when the lens of the eye becomes cloudy.

As a result, not enough light passes through the eye, making vision blurry and hazy.

More Dr Ellie Cannon for The Mail on Sunday…

Age increases the risk of cataracts because debris builds up in the lens over time.

Without treatment, vision will worsen, eventually leading to blindness.

The lack of access to cataract surgery in the world is responsible for half of the cases of blindness in the world.

Cataract surgery is generally very safe and effective and often dramatically improves the quality of life for patients.

The eye’s cloudy lens is replaced with a clear artificial lens and recovery takes up to six weeks.

A small minority of people suffer from complications after the operation.

Your GP has seen it all

I have recently been inundated with letters from readers desperate for help in persuading their partner to see their GP.

In almost all of these cases, the problem is something the person finds embarrassing, such as difficulty going to the bathroom.

I have to tell you that patients who are too shy or ashamed to see a doctor for these types of issues are usually the ones who end up with the most miserable long-term results.

Doctors will have seen your problems hundreds of times before, whatever they are. And a few moments of discomfort are a small price to pay for something that could save your life.

So persuade your partner to at least have a phone consultation first. Once they see how unfazed the GP is by their problem, they may feel better about a face-to-face appointment if needed.

The most common is further clouding of the lens that occurs over months or years.

This can be corrected by laser surgery.

Less common are complications that affect other parts of the eye and dislocation of the new lens.

If anything doesn’t feel right after surgery, patients should return to their surgeon and ask their opinion.

Three weeks ago I developed pain in my cheekbone and my left eye started to itch.

My doctor prescribed me aciclovir tablets which had terrible side effects: headaches, dizziness and numbness in the cheek, nose and teeth.

I was given painkillers, but they don’t help.

Can anything make it go away?

It looks like shingles, which is a disease caused by the herpes virus – the same one that causes chicken pox.

It usually affects only one strand of the nervous system, which is why the symptoms are always one-sided.

Usually this causes a red rash that may blister, but not always.

It also causes burning pain, so the skin hurts even at the slightest touch.

This pain can persist for weeks and in up to 50% of cases for up to a year – we call this postherpatic neuralgia.

We offer the same treatment, even if there is no rash: aciclovir, an antiviral drug.

It might be recommended to take it for an extended period, if post-herpetic pain is a problem.

Aciclovir has side effects, like any medicine, and that includes headaches.

But numbness isn’t a known side effect – it’s much more likely to be related to neuralgia.

Standard pain relievers can help, but usually for neuralgia we need to use a specific nerve pain reliever such as Amitriptyline or Gabapentin

I was irritated to read a charity report last week which seemed to suggest that GPs were ‘ignoring’ the signs of ovarian cancer.

This, along with the inability of patients to detect symptoms on their own, is thought to be responsible for thousands of unnecessary deaths each year due to late diagnosis.

But the story is not so simple.

It’s true that the telltale signs of ovarian cancer – bloating and pain in the lower abdomen – can easily be confused with more common and less serious conditions such as irritable bowel syndrome.

But that doesn’t mean GPs “ignore” the possibility of ovarian cancer.

The truth is that not all doctors can refer patients for all the tests we think they need due to a lack of resources in some areas.

In my North London practice I can easily refer patients for gynecological ultrasounds, but I know a colleague in another part of the country who can only do so if the patient is high risk.

Instead of blaming it all on GPs, charities should lobby health chiefs to stamp out the postcode lottery within our NHS.

Ministers should identify regions with limited resources and invest more money and personnel in the system.

We know all too well the signs of ovarian cancer, but if we can’t order a test, early diagnosis is next to impossible.