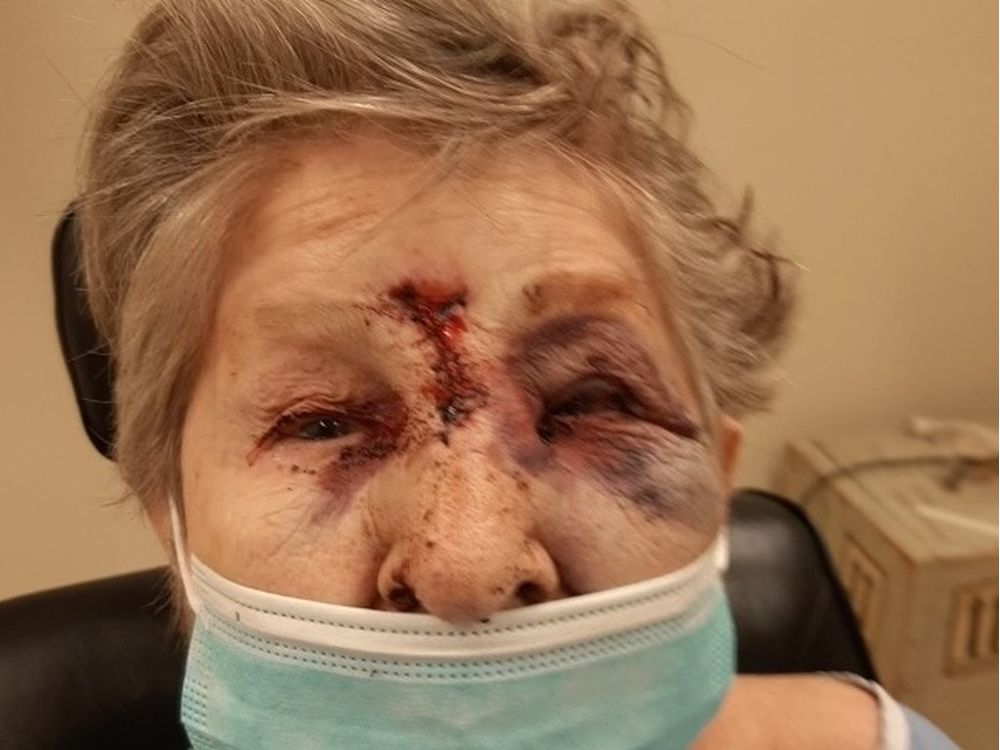 After Joyce Robinson, an 85-year-old Vancouver resident, fell at 2 a.m. Thursday morning, breaking her nose, fracturing an orbital bone and tearing an eye canal, she was rushed to the emergency.

It was not unusual for her to go to the emergency room at Vancouver General Hospital. According to her daughter, she has fallen several times over the past two years due to her age and after suffering a minor stroke.

But it was unusual not to be admitted overnight for observation.

Her daughter Sandra Robinson, who is a professor at the University of British Columbia’s Sauder School of Business, was shocked her mother walked out of hospital wearing a simple dress after staff threw away her clothes because they were covered in blood and without painkillers for the excruciating fractured orbital bone.

She said her mother is usually watched overnight in the hospital due to her age and medical history. They usually have to do some tests to find out why she fell. But this time, she was sent home, although the injuries were the worst she had ever suffered from a fall.

Robinson wants to know if the threshold for admitting an elderly person overnight has changed given the current shortage of healthcare workers.

“My mother went through the emergency room many, many times. They usually keep it for several days to evaluate it. It’s really a first,” she says.

“Something is collapsing. I don’t blame the staff. I think they’re trying to deal with a system that’s crashed.”

In a written response, Vancouver Coastal Health said it had “the capacity and required level of clinical and support staff” to provide care for all patients.

“Vancouver Coastal Health is not releasing patients due to a shortage of beds – patients are only released on the advice of a physician and provided with a discharge plan,” the statement read.

Before Joyce Robinson, who lives in her own apartment in a small assisted living complex in Vancouver, could be released, she had to have her eye stitched up by a senior ophthalmologist. However, her daughter said the eye center was in another building three blocks away.

“But she had neither clothes nor shoes. And they asked us to accompany him there,” said Robinson. His brother finally managed to convince the hospital staff to bring him in a wheelchair. According to Robinson, her mother was told not to scratch her face and she came out in her hospital gown.

It wasn’t until the family brought her home that they realized she had been given no painkillers and just a prescription for an antibiotic.

“I know there is no room and I know there are other people in terrible situations in the hospital. But it’s so sad,” she says.

“We see ample evidence that the health care system has been under pressure for a long time. And I think he’s reached a tipping point. It has to be if they no longer admit and monitor older people after they just say, “Hey, you can just go home”. Why has he changed?”

Premier John Horgan said B.C.’s health care system is “reeling” due to staffing shortages that have led to the closure of at least three emergency rooms.

Horgan has repeatedly pointed to increased federal funding as the key to strengthening health care. Provinces and territories have asked Ottawa to increase its share of health care funding from 22% to 35%, which for British Columbia would mean an increase of $3.9 billion per year.

Last month, journalists Lori Culbert and Dan Fumano wrote about the death of a woman at Lions Gate Hospital after being stuck in a waiting room for two days, a tragic a sign of the growing shortage of staff in overcrowded emergency rooms in British Columbia.

— with file by Katie De Rosa

Sign up to receive daily news from the Vancouver Sun, a division of Postmedia Network Inc.

Thank you for your registration!

A welcome email is on the way. If you don’t see it, please check your spam folder.

The next issue of Vancouver Sun Headline News will soon be in your inbox.

We encountered a problem during your registration. Try Again