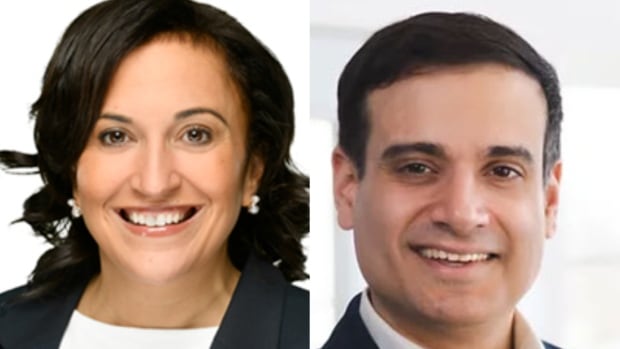 Zach Churchill and Angela Simmonds test the battery life of their phones.

The two Liberal MPs are spending the final days of their party’s leadership campaign talking to as many members as possible to build support and making a final speech to any undecided voters ahead of the July 9 decision at a convention in Halifax.

“If I need to meet people where they are, I’ll go there,” Simmonds, the MPP for Preston, said in a recent interview.

A year ago, most Nova Scotia Liberals probably wouldn’t have imagined having a leadership convention this summer. The party was leading in opinion polls and new leader and premier Iain Rankin looked set to lead his team to a third consecutive election victory.

Voters had other ideas.

As Rankin announced earlier this year that he would be stepping down as leader following election defeat at the hands of the Progressive Conservatives, Simmonds and Churchill, the MPP for Yarmouth, have emerged as the candidates to replace him.

They vie for leadership at a difficult time for the party.

Along with the electoral defeat, a report stemming from that result highlighted a disconnect between party officials in Halifax and volunteers and members in electoral districts across the province. He called for a complete overhaul.

Churchill said his tours of the province to meet with party members clarified the job that needs to be done by the next leader.

“I think we have big challenges ahead here in the province, and societal, and the more intellectual resources we can bring to the table to build our pipeline of ideas to tackle the big issues of the day. , the stronger we are, we’re going to be like a party,” he said in a recent interview.

Simmonds, meanwhile, cites party renewal and achieving the recommendations of the campaign review as a key goal if she becomes leader.

The party has to champion many issues, she said, but that only works if the party is strong and people feel their voice is heard.

“I’m not saying we can’t do two things at once. I can walk and chew gum. But what I’m suggesting is that we can’t keep building this house, this party, if we’re not fixing the cracks we have now.”

Both candidates have attributes that their supporters see as selling points and their opponents as liabilities. Ironically, this mainly focuses on their respective political experience.

Simmonds was first elected last summer. First on the leadership campaign, she bristled at the idea that she lacked experience compared to Churchill.

More recently, however, Simmonds has embraced this as a strength. During the final campaign debate, she even spoke about how some people thought former prime minister Stephen McNeil wasn’t ready until he won the party leadership.

“For the past 10 years, I’m not ashamed of not having been in the Legislative Assembly, because I got a law degree, I had the opportunity to own my own business and I raised three children,” she said in an interview. .

“From these experiences, I think will also resonate with all Nova Scotians in this province, rather than some.”

Churchill, meanwhile, has been an MP since 2010.

During this period, he established himself as an effective communicator and held important ministerial portfolios, notably those of education and health.

The experience goes both ways

But this experience comes with a direct link to a former government. This government, while winning at the polls, was also polarizing its handling of unions and what would become the province’s housing crisis, and was seen to have transparency issues.

He fears none of this.

“You have to make the right decisions and sometimes the public won’t agree with you on those,” Churchill said.

“But the fact is that … we are facing a situation … radically different from what we had during our years in government. When we started, people couldn’t sell their houses – now people can’t sell them. Inflation was low, wages were high – the opposite is happening now.

Churchill said the ongoing struggles of the health care system must be at the center of the party’s concerns as the next election nears.

Braves: Could Trey Mancini be a trade target?