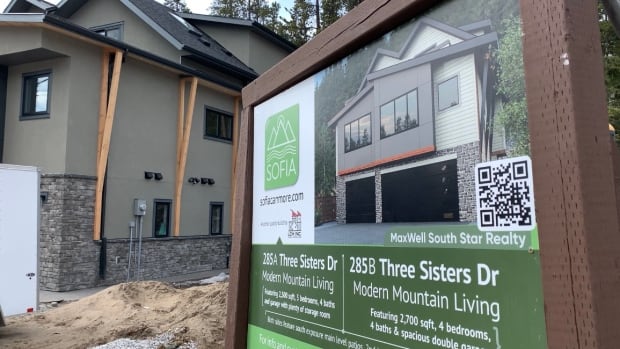 Canmore City Council will hear from the public about a unique development opportunity just steps from its downtown main street.

Canadian Rockies Public Schools (CRPS) hopes to develop part of the land at Lawrence Grassi Middle School – turning the investment into a legacy fund to help the board with future funding.

Proposal? 20 units to house school employees, 20 others for affordable housing and 80 market units.

One group hopes that the entire project can be dedicated to affordable housing, which they believe will seriously reduce Canmore’s affordability problem and revitalize the heart of the town.

“What’s on offer is a very small proportion of affordable housing and the vast majority being market housing,” said Karsten Heuer of Bow Valley Engage. “Which, on current trends, is likely to be bought up by outsiders and used as weekend homes that stay dark the vast majority of the time.”

Canmore is still considered one of the least affordable housing markets in the country, a status that Mayor Sean Krausert and councilors are working to change.

Heuer said potential downtown development requires out-of-the-box consideration, such as a land swap — which would allow the school board to build more market housing on the outskirts of town — or other applications for affordable housing funding available at the federal level.

“Nobody made the big picture thinking about the incredible opportunity that is in front of us,” Heuer said. “It will be such a shame if this passes and we end up with more weekend homes downtown.”

There are nearly 100 written submissions ahead of the public hearing – some expressing concern and some supporting this land use change.

Some residents believe the project is unsuitable and will tie up traffic and overwhelm on-street parking. Others worry about the loss of green spaces in the heart of the city.

For the development industry, the proposal ticks many boxes, such as adding density while utilizing the city’s existing, limited footprint.

“[The development] would definitely support a bunch of new housing that would cater to existing and potential families and others coming to work in the community,” said Bow Valley Builders and Developers Association Executive Director Ian O’Donnell.

“We need more housing and a variety of housing types to continue opportunities for economic growth and to ensure people stay in our community.”

The redevelopment plan for the area was unanimously adopted at first reading on February 1. Then it will go through a public hearing process where residents can speak before being put to a vote by the city council.