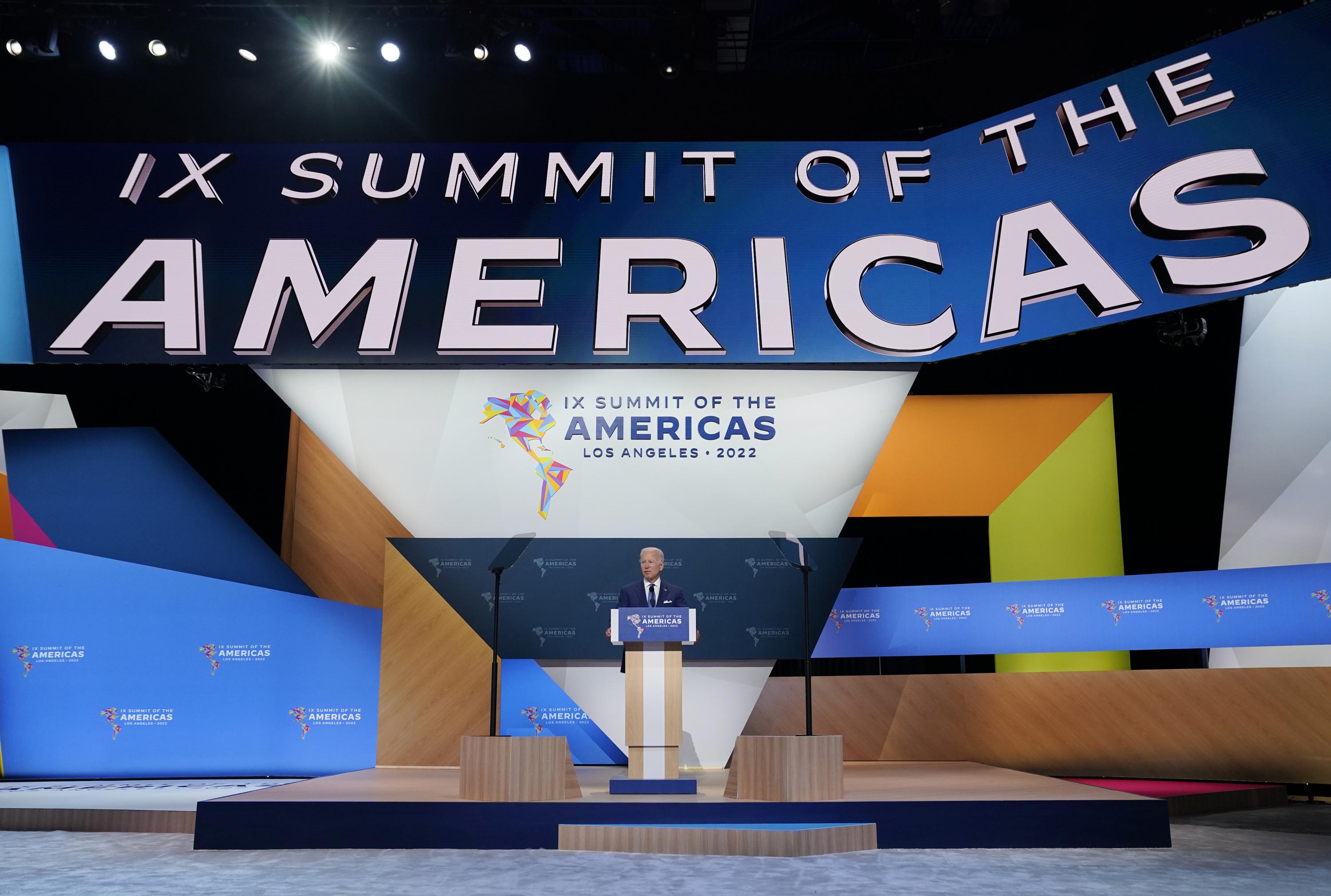 Biden seeks unity, finds discord at Summit of the Americas

LOS ANGELES (AP) — President Joe Biden attempted to present a unifying vision for the Western Hemisphere on Thursday, but the Summit of the Americas quickly degenerated into open discord in a telling illustration of the difficulties of bringing North and South America together. South around common objectives on migration, economy and climate.

“There’s no reason the Western Hemisphere shouldn’t be the most forward-looking, democratic, prosperous, peaceful, and secure region in the world,” Biden told Reuters. start of the summit. “We have unlimited potential.”

In the wake of Biden’s remarks, Belizean Prime Minister John Briceño publicly opposed the United States’ exclusion of countries from the summit and the continued US embargo on Cuba.

“This summit belongs to all of the Americas – so it’s inexcusable that there are countries in the Americas that aren’t here, and the power of the summit is diminished by their absence,” Briceño said. “At this most critical time, with the future of our hemisphere hanging in the balance, we are divided. And that is why the Summit of the Americas should have been inclusive. Geography, not politics, defines the Americas.

“We certainly would have liked a different Summit of the Americas,” Fernández said in Spanish. “The silence of the absent calls us. So, it will not happen again, I would like to say, for the future, the fact that a country is the host country of the summit does not have the capacity to impose the right of admission on the member countries of the continent.

Disparities in wealth, governance and national interests make it difficult for Biden to duplicate the partnerships he has assembled in Asia and Europe. That had already created low expectations at a summit the United States is hosting for the first time since 1994.

With diplomatic efforts strained by boycotts at the top and legislative proposals stalled in a polarized Congress, Biden has focused on trying to get businesses and the private sector to support his efforts. Yet the summit did little to deliver on the promise made by the US president, especially with the notable boycott of the summit by the Mexican president and the uncertainty as to whether there are good incentives for Latin America to closer to the United States.

“It’s always been difficult to find consensus in Latin America,” said Ryan Berg, senior fellow at the Center for Strategic and International Studies, a Washington-based think tank. “It’s an extremely diverse region, and it’s obviously difficult for her to speak with one voice.”

On a busy diplomatic day, Biden met with Canadian Prime Minister Justin Trudeau and agreed to travel to Canada in the coming months, two government officials familiar with the plans told The Associated Press. They were not authorized to discuss the case publicly and spoke on condition of anonymity.

Biden was also due to speak with Brazilian President Jair Bolsonaro and delivers a speech in front of all the participants. Vice President Kamala Harris met with Caribbean leaders to talk clean energy, and First Lady Jill Biden was hosting a brunch to bond with other spouses. The day was to end with dinner at the Getty Villa, an art museum overlooking the Pacific Ocean.

There could be more tension when Biden first meets Bolsonaro, an ally of former President Donald Trump. Bolsonaro is seeking a second term and has questioned the credibility of his country’s election, which has alarmed officials in Washington.

When Bolsonaro accepted an invitation to the summit, he asked Biden not to confront him about his election attacks, according to three of the Brazilian leader’s cabinet ministers who spoke on condition of anonymity to discuss the matter.

Jake Sullivan, Biden’s national security adviser, dismissed the idea that Biden agreed to any terms of the meeting with Bolsonaro.

“There are no off-limits topics in the president’s bilateral relationship, including with President Bolsonaro,” Sullivan told reporters. He added, “I anticipate the president will discuss open, free, fair and transparent democratic elections.”

The nature of democracy itself became a sticking point when planning the guest list for the event. Mexican President Andrés Manuel López Obrador wanted the leaders of Venezuela, Cuba and Nicaragua to be invited, but the United States resisted because it sees them as authoritarian.

In the end, no agreement could be reached and López Obrador decided not to attend. Neither did the presidents of Honduras, Guatemala and El Salvador.

“The president was very clear that this should be a summit with no exclusions,” Reina said. Still, he said the Honduran government was ready to work on common issues, saying, “The political will to work with all countries in the Americas is there.

It’s a reminder that relations with Latin America have proven tricky for the administration even as it cements ties in Europe, where Russia’s invasion of Ukraine has sparked closer cooperation, and in Asia. , where the growing influence of China has shaken some countries in the region.

One of the challenges is the undeniable power imbalance in the hemisphere.

World Bank data shows the US economy is more than 14 times the size of Brazil, the second-largest economy at the top. The sanctions imposed by the United States and its allies on Russia are much tougher on Brazil, which imports fertilizer from Russia. Trade data indicates that the region has deep ties with China, which has also made investments.

That leaves the United States in a position to show Latin America why a closer relationship with Washington would be more beneficial at a time when economies are still struggling to emerge from the pandemic and inflation has worsened conditions.

Sullivan promised that the United States will “invest specific funds to produce tangible results” in the region, with training for workers and money for food security, among others. He said US efforts will have “much more impact” on people’s lives than “the kinds of extractive projects China has invested in.”