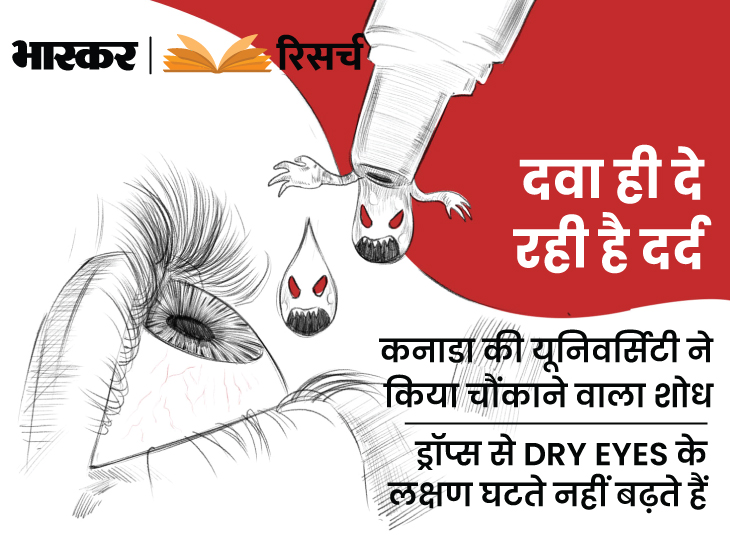 Beware of drops for DRY EYE

Rishikesh, 28, works in a multinational BPO in Gurugram. At the beginning of his 6-year career, problems like burning, itchy eyes started appearing due to constantly spending time on the laptop screen. The doctor called him a dry eye sufferer ie DED and prescribed him eye drops. But even after using eye drops for 6 years, her problem kept getting worse instead of going away. Use of eye drops increased from 4 times a day to 8 times. This story is not just that of Rishikesh, but of one in four people who spend more time on a computer or mobile.

What Rishikesh and millions of others like him don’t know is that the preservatives in the eye drops they use for dry eye relief only exacerbate the condition. Research conducted at the University of Waterloo in Canada revealed the side effects and reasons for long-term use of these eye drops. Also, continuous use of these drops for a long time can make the condition so severe that you may need surgery.

The rate at which computers or laptops are becoming a part of every job and the rate at which mobile screen time is increasing, the cases of dry eye are also increasing in India. According to a 2018 report by the Indian Journal of Ophthalmology, 32% of people in northern India suffered from dry eye. Now that number has increased even further. However, carelessness in identifying and treating this disease can be fatal. Know what dry eyes are and why it’s important to be careful when choosing eye drops.

The problem is not with the drops… with their preservatives
The ingredients of eye drops used in dry eye do not harm the eyes. However, certain preservatives are used in the bottles of these drops to inhibit bacterial growth. These preservatives prolong the life of eye drops, but their continued use damages the corneal membrane, ie the tear film. According to researchers Karen Walsh and Lyndon Jones, from the Center for Eye Research and Education at the University of Waterloo, Canada, dry eye damages the surface of the cornea and destabilizes the tear film above it. Preservatives do not reduce these symptoms, but aggravate them.

There may be corneal epithelial toxicity…surgery is the only treatment
Eye surgeon Dr. Suresh Pandey explains that if eye drops containing preservatives are used for a long time, a condition called corneal epithelial toxicity can occur. Although this disease is rare in a healthy person, but due to preservatives in eye drops, this disease can occur in the long term. Its treatment is possible only with surgery.

The DROPS market grows at a compound rate of 4.7%

All eye drops used for dry eye syndrome are readily available over the counter without a prescription. People often start taking eye drops at the first symptoms and on the advice of acquaintances. While it is important to know if the symptoms are really dry eye or if there is another reason. Even if there is a disease, depending on its severity, the doctor indicates how often and for how long to use the drops. Eye drops without preservatives are also available in the market, but they are expensive due to their short shelf life. It is best to consult a doctor before starting any eye drops.

Lutein market to be swept away by rising incidences of Ocular

In battle over baby’s blood, Michigan case could have implications in New…