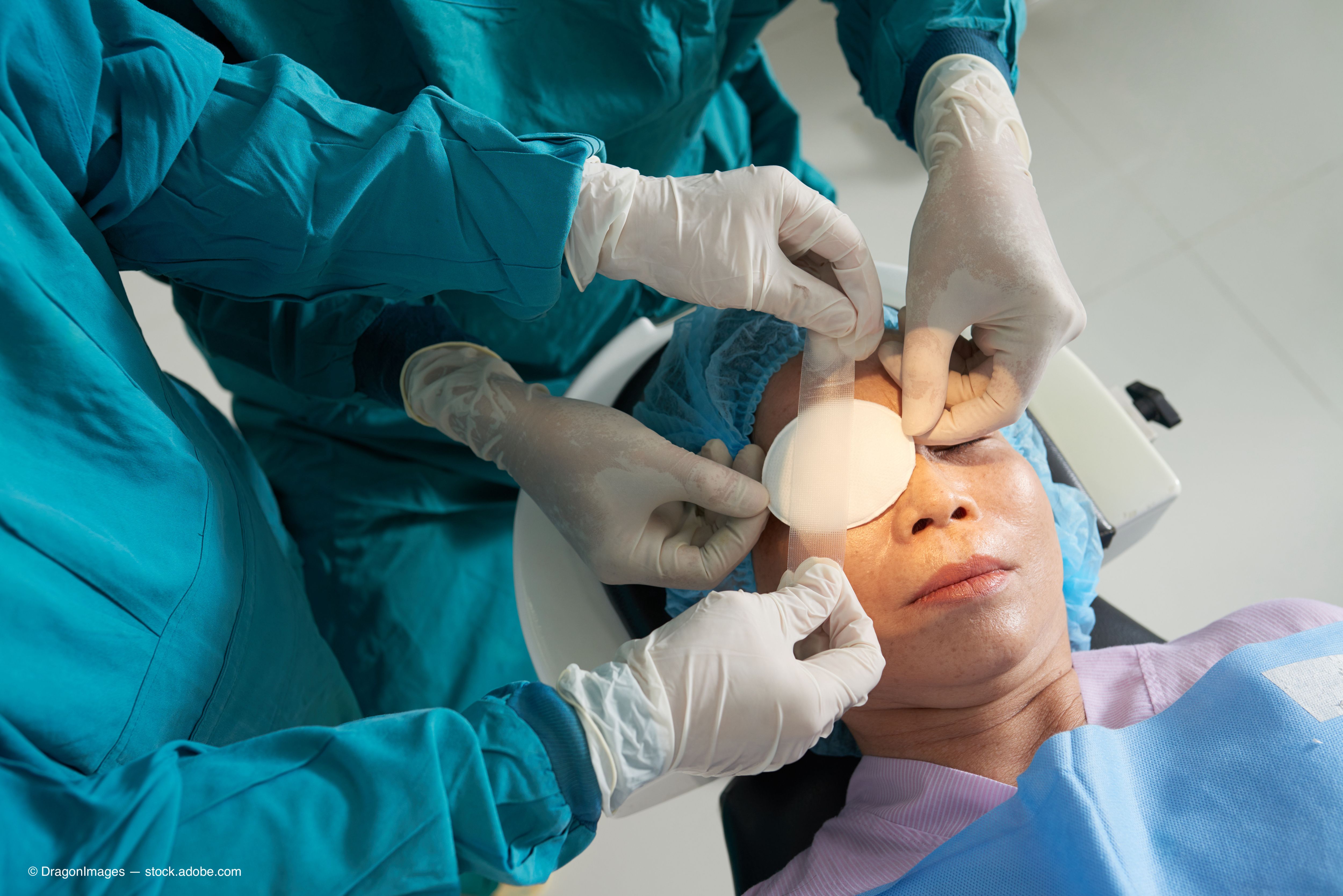 You start your exam with a complete history that may suggest a complication.

He reports that his vision is slightly blurry, but better than before the surgery. He is slightly photophobic and he has a slight foreign body sensation OD.

He says he’s been faithful to his combo gout (prednisolone phosphate/gatifloxacin/bromfenac) and slept well the night before with his Fox shield.

Related: How to manage early complications from cataract surgery

Medications of most concern include current or past use of alpha receptor blockers such as tamsulosin (Flomax), terazosin hydrochloride (Hytrin), doxazosin (Cardura), and alfuzosin (Uroxatral) because they make more probable intraoperative flaccid iris syndrome.

Fortunately, the patient had no history of taking alpha receptor blockers.

How often you see your patient during the 90-day postoperative cataract period varies on a case-by-case basis, but for uneventful surgical cases where the patient is healing appropriately, it is safe to bring them in for follow-up at 1 day, 1 week, and 1 month postoperative.

In this case, the patient has an uncorrected visual acuity of 20/60, which is pinned at 20/302 OD. His extraocular muscles are full without pain and the confronting visual fields are full to finger count in all OD quadrants. Its pupils are equal, round and reactive to light without APD.

Its anterior chamber has 2+ cells, 0.5+ flare, and light debris. Its posterior chamber-IOL (PC-IOL) is centered and sharp. His IOP is measured at 35 mmHg OD, and the wound does not show negative staining, which could indicate a positive Seidel sign. All other results are as expected for 1 day after surgery.

Elevated iatrogenic IOP is common (22%) at the one-day postoperative visit, and there are 2 options to consider for lowering the pressure: ocular hypotensive medication or burping the wound.1

The patient did not approve of headache, nausea, or vomiting, so 1 drop of 0.5% timolol maleate, a fast-acting ocular hypotensive, is instilled in office OD. Twenty minutes later, her IOP measured 22 mm Hg.

Related: When cataract findings are mistaken for dry eye

She is prescribed 0.25% timolol maleate QAM OD, and instructed to continue her combination drop regimen as specified above and to continue wearing her Fox Shield OD nightly for the next week to avoid inadvertently reopening the wound while sleeping.

Additional instructions are provided to help prevent the wound from reopening, including avoiding heavy lifting, bending at the hip, and rubbing the right eye. To prevent infection, he is educated to avoid getting water in his right eye while showering.

He is told about symptoms such as pain, discharge, decreased vision, increased photophobia, increased redness, new floaters, new photopsia, or a curtain over his vision, which may indicate infection, retinal detachment, or peak of PIO.

Expected results at 1 week
During the one-week postoperative visit, clinical results should be stable or improved compared to the one-day visit. There may be slight residual anterior chamber reaction and slight corneal edema at the incision site. Patients usually report improved vision, but they may have mild photophobia and glare.

Assessing the integrity of the incision site is crucial during this visit to guide future management plans, such as bathing instructions and restrictions on physical activity.

The patient is seen for his week-long postoperative visit, during which he reports that his eye appears normal, he has adhered to his drop regimen and is wearing his Fox shield. His uncorrected AV is improved to 20/25-. All other preliminary tests are normal.

On biomicroscopy of the anterior segment, his wound is healing well and there is no discoloration on the wound, just residual edema at the incision site.

His anterior chamber is now deep and quiet. Her IOP is down to 12 mmHg, so the timolol is stopped. Since there are no stains on his incision, he can now shower normally and stop using the Fox Shield. All other formations remain the same.

Expected results at 1 month and 3 months
When the patient returns for their 1 month and potentially 3 month visit, the eye should be completely normal except for an incision scar.

At the one-month postoperative visit, the patient reports that his right eye appears normal and that he is able to see well at a distance. Its uncorrected VA is improved to 20/20- and it refracts to +0.25 -0.25 x 180 with an addition of +2.50.

On biomicroscopy of the anterior segment, all findings are normal with the addition of a temporal corneal incision scar. His IOP remains normal at 11 mm Hg and after dilation, all signs of posterior segmentation are normal. No other positive test is detected.

He is then relieved of care; however, he is educated to return to the clinic if eye disorders have been noted.

LVPEI and Bajaj Group will create a retina care center