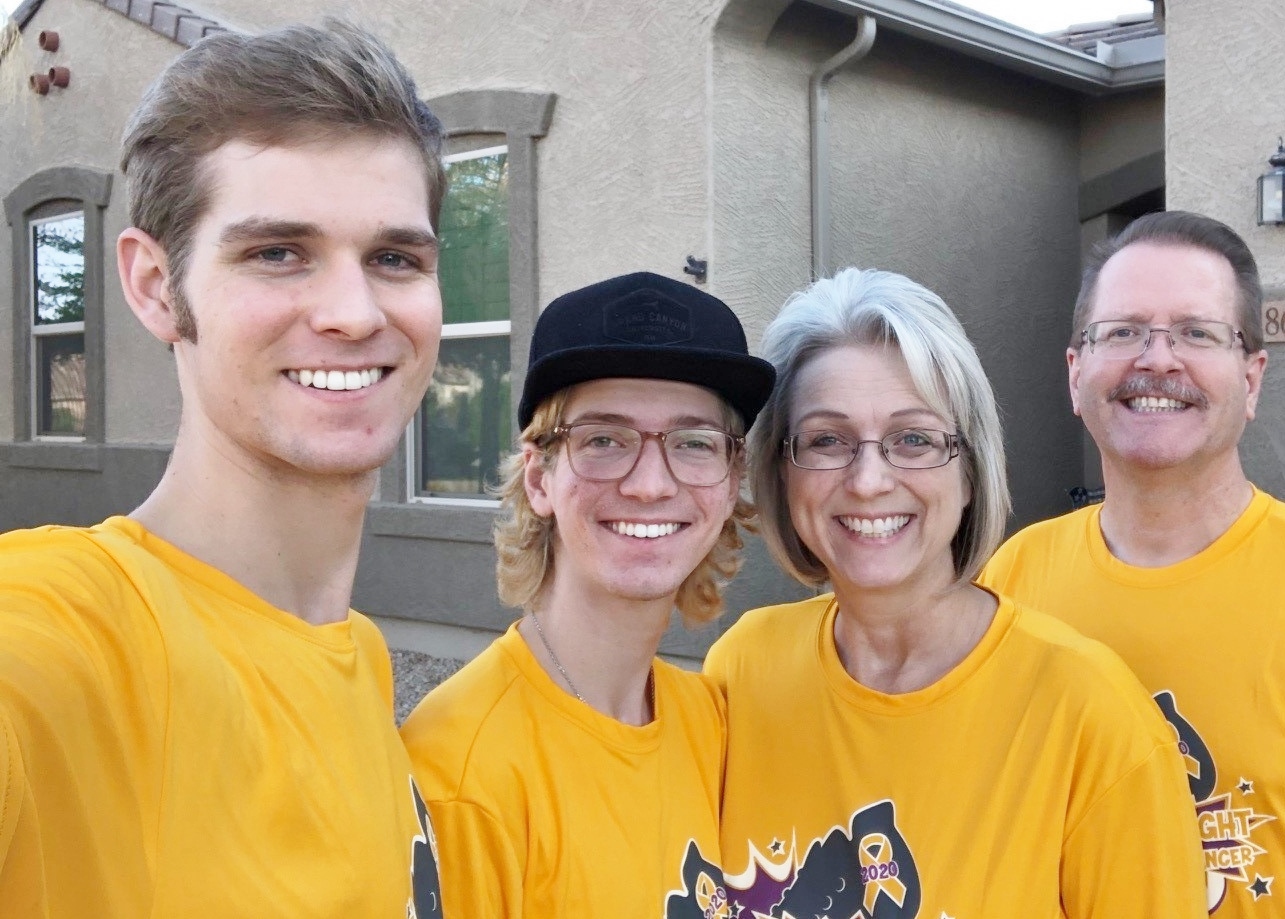 By Janie Magruder, for wranglernews.com

Here are some of Christian Lopez’s favorite things to do: playing the drums, riding a bike, building speedboats from Legos, doing math on an abacus and his teenage brother and little sister.

Pretty typical for a 9 year old, you say. But this boy is not an average student because, after an operation five years ago to remove a brain tumor, Christian woke up blind.

He was largely discouraged.

“He had time to feel sorry for himself, it was three days after his operation and then he was done,” said his mother, Brenda. ” He is not scared. He doesn’t hold back. It’s really cool to see.

Christian is exactly the type of kid Patti Luttrell, co-founder and executive director of the Children’s Cancer Network in Tempe, wanted for the 2021 Childhood Cancer Race. As the honorary starter of the race, Mesa’s boy will handle media interviews and sound the horn to kick off the events.

“He’s very representative of our heroes – resilient, strong – and he’s going through it all head on,” Luttrell said. â€œHe’s just happy to be living his life. “

The 11th Annual Run to Fight, which raises money and support for young cancer patients and their families in Arizona, and raises awareness about pediatric cancers, takes place Saturday, October 16 at Salt River Fields, 7555 N. Pima Road in Scottsdale. The 10K starts at 7am, followed by the 5K run / walk at 7.45am. Cancer survivor walks through stadium bases at 9 a.m.

You can also participate virtually, form a team and register at runtofightcancer.com

According to the National Cancer Institute, cancer is the leading cause of disease death in children in the United States. It is estimated that 15,590 children and adolescents between the ages of 0 and 19 will be diagnosed with cancer this year and 1,780 will die from it.

Overall, the most common types of cancer in children are leukemia, brain and central nervous system tumors, and lymphomas.

Luttrell and her husband Steve were confronted with childhood cancer when their son Jeff was diagnosed with leukemia at the age of 5. He underwent several cycles of chemotherapy and radiation therapy and a bone marrow transplant to treat the original cancer, which came back four times. Jeff was later diagnosed with secondary cancer, had multiple surgeries and radiation, and had a recurrence.

Today, at 33, Jeff has been cancer free for almost five years and continues to be an inspiration.

The Luttrells created CCN to provide hope, education and resources to families facing emotional devastation and similar economic hardship. The average cost per hospital stay for a child with cancer is $ 40,000, according to the SCC, and most families spend an additional $ 10,000 on non-medical expenses such as gas, parking and child care. additional children.

Through Run to Fight and other CCN projects, the organization has provided $ 4.8 million to families in Arizona since 2005. It supports 800 families each year with gas and food cards, wigs, bus passes, health and wellness activities and support programs.

In addition, the CCN awarded nearly $ 40,000 in post-secondary scholarships in 2020 to survivors, siblings and parents whose lives have been touched by cancer.

One of CCN’s most significant contributions is funding two part-time family counselors at the Center for Cancer and Blood Disorders at Phoenix Children’s Hospital, a beneficiary of the race.

â€œFamilies are so grateful – whether they are just starting their journey or have been off treatment for many years, but may still be feeling its side effects – to have this support at PCH,â€ he said. said Luttrell.

The Run to Fight 2020 was virtual due to the Covid-19 pandemic, but that didn’t stop CCN from pulling out all the stops. Videos and photos were posted, and t-shirts and medals were sent to 1,000 participants.

“We are there no matter what,” she said.

This will be the first race to fight the Lopez family, comprising Christian David’s father, brother Anthony and sister Elise. Brenda was pregnant with Elise in June 2016 when Christian was diagnosed with a half-dollar-sized brain tumor behind her right eye. What she thought was a routine eye exam instead revealed a cloudy mass, and a PCH MRI confirmed her worst fears.

â€œIt hit me like a bomb,â€ said Brenda, who is a nurse.

The entire tumor, which was also starting to invade the space behind Christian’s left eye, could not be removed during the operation. The greatest risk of the procedure – blindness – has come true.

What followed was 18 months of chemotherapy and the associated side effects, and for a while the spots stopped growing. But when tests showed they were pushing again, Christian started treatment a year ago, and it was found to be effective, Brenda said.

The family benefited from CCN’s summer day camps for Christian and Elise, and received help with some of their expenses. But it’s more than that, Brenda said.

â€œWe have certainly been touched by their generosity, so we are happy to be able to motivate (others) to give,â€ she said, â€œbecause they do so much for so many families. “